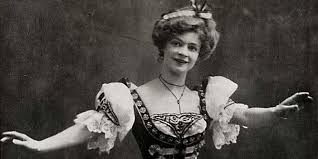 Dame Adeline Genee is a name that is not familiar with most of the general public, but in her time Adeline Genee was well known and celebrated in England as a great ballet dancer. She was a Danish girl and at the age of 15 already a veteran of five years on the stage.

She was born Anina Kirstina Margarete Petra Jensen in Arhus, Denmark in 1878. She took ballet dancing lessons with her uncle Alexandre Genee from the age of three. When she was eight years old, Alexandre and his wife Antonia adopted her.
She changed her name to Adeline in honor of the Italian opera star Adelina Patti. Adeline Genee made her debut with her uncle’s touring company when she was ten years old in Oslo.
She danced at the Zentralhallen Theatre at Stettin and at the age of seventeen appeared at the Imperial Opera in Berlin. She then moved on to dance in Copenhagen and London where she was made principal ballerina with The Royal Opera House.
In 1896 she danced with the Berlin Court Opera Ballet and the Munich Opera Ballet. A year later she accepted a six-week booking in England and ended up staying ten years.
From the year April 1905, she was said to have danced in 400 performances of the musical play, The Little Michus, at Daly’s Theatre.
Adeline Genee was versatile enough to dance light music hall roles, as well as most of the classical roles. Slender and elegant, she was often described as like “Dresden China”.  Her dress style was very old fashioned, as she preferred the style of costume that belonged in the 1830s.

In 1910, Adeline Genée got married to Frank S. N. Isitt and gradually reduced the frequency of her appearances.  In 1911, Alexis Kosloff presented her with a silver trophy, inscribed “To the World’s Greatest Dancer.”
For several years, Adeline Genée alternated between a season in London and one in New York.  Diaghilev also saw her ballet dancing and immediately offered her a contract, but she refused it.  Adeline Genée devised her own ballet, called La Camargo, and on 21 June 1913, she returned to her greatest role, as Swanilda in Coppélia, this time in Melbourne and Sydney.
She officially retired from performing in 1914, but not before taking her own company to America, and then touring Australia and New Zealand.
In 1916, she went on a sixteen-week tour of Australia with J. C. Williamson’s company.  The Australian navy wildly cheered her dancing the hornpipe in a charity performance billed as “Navy Night.”
On returning to London, she gave her last major performance in April 1916 at the Coliseum in “The Pretty Prentice.” After that, she appeared only in occasional charity performances and commemorations. 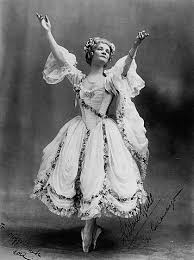 In 1923, Genée was awarded the Order of “Ingenue et Arti” by the King of Denmark. Adeline Genée last performed at the Coliseum Theatre in London on March 4, 1933, when the theater changed from a music hall into an opera house.
Genée became a Dame of the British Empire in 1950. She gave her name to the Genee Theatre in East Grinstead and the Genée studio in the Royal Academy of Dance, Battersea, London.
Her best-loved role was that of Swanhilda in Coppelia and she is still remembered for the gravity-defying lightness of her ballet dancing.  She was known to ‘positively bounce,’ as if the ground was too hot for her feet to stay on.
Adeline Genee was one of the founders of the Association of Operatic Dancing, which we know today as the Royal Academy of Dance. She was the first president of the Academy and worked relentlessly to establish it, not only in England, but also in North America. Genee was also on the panel of examiners for the first examinations that were held by the Association of Operatic Dancing.
Adeline Genee’s work for the Academy began at the beginning and ended long after she had retired from the presidency. Her word was always law, and she had a strong and powerful personality. She was an immaculately dressed woman at all times and very distinguished.
Adeline Genee passed away in 1970.

A Brief History of her Work with the Royal Academy of Dance: 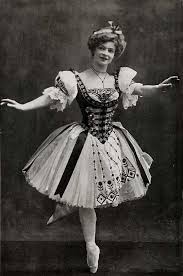 In 1920, Genée collaborated with Philip Richardson of the Dancing Time magazine, with the aim of improving the standard of dance and the teaching of dance in the United Kingdom. This led Richardson to organize a meeting of eminent dance professionals at the former Trocadero Restaurant in Piccadilly, with Genée as one of his special guests representing what were, at the time, recognized as the leading methods of Classical Ballet training.
Queen Mary consented to become the Academy’s Patron.  A Royal Charter was eventually granted by King George V in 1935, with the Association becoming the Royal Academy of Dancing.
In 1953, Dame Adeline Genée instituted the Queen Elizabeth II Coronation Award. She was President of the Academy until her retirement in 1954 when she was succeeded by Dame Margot Fonteyn.
Today, the Association is known as the Royal Academy of Dance (RAD), with Dame Antoinette Sibley as President. It has grown to become one of the largest and most influential dance teaching and examination boards in the World.  The RAD now has over 13,000 members and operates in 79 countries Worldwide. There are currently over 1,000 students in full-time or part-time teacher training programs with the Academy and each year, the examination syllabus is taught to more than a quarter of a million students worldwide.

In 1931, the Association established the Adeline Genée Gold Medal Awards, as a scholarship scheme for aspiring young dancers.
Initially, medals were only awarded to female dancers, but awards for men were later introduced in 1939.
Today, the Royal Academy of Dance continue to offer the awards, however, they have become known as the Genée International Ballet Competition, which is recognized as one of the most prestigious dance competitions in the world. The Genée competition now attracts candidates from around the world, with recent finals being held overseas in Australia, Canada, Greece, Hong Kong and Singapore.

Now I know that you would love to see Dame Adeline Genee dancing, but this is the only live video footage I could find of her where she examined a set of advanced students.

8 thoughts on “Who Was Adeline Genee And How Did She Influence Ballet?”