The Song of the Body: Dance for Lifelong Wellbeing

The Song of the Body is a book about using dance for lifelong well-being. It is a fascinating and highly researched look at dance as a profession, an industry, and a hobby. The Song of the Body celebrates dance as a powerful means of enhancing physical and emotional health at all stages of life and considers dance and lifelong well-being from the perspectives of the young through to older adults.

This beautifully produced collection includes profiles of dance luminaries such as Gillian Lynne and Robert Cohan as well as commentary from dancers, directors, teachers, dance agencies and companies including Step into Dance, Growing Older (Dis)gracefully and Dance UK.

The book approaches a broad selection of culturally relevant topics, from how dance can aid the mental and physical health of older adults, to how it can enrich the lives of the young.

Other topics include how dance can help adults with learning disabilities overcome barriers, as well as posing the question ‘who cares about the health and professional well-being of professional dancers?’ With a foreword by renowned ex-prima ballerina and RAD president Darcey Bussell CBE and with stunning color photographs throughout, The Song of the Body is a must-have addition to the bookshelves of anyone with a professional or personal interest in dance.

Back in the early 1900’s in England there were over two thousand dance teachers, but only a handful of them could actually teach and produce good dancers. The teaching profession was entirely disorganized and unregulated. Anybody in those days could set up as a teacher, and those that did turned out pupils with only the most rudimentary technique.

Something had to be done to make it less easy for the bad teachers to wreck the chances of young dancers by incompetent teaching.

What Changed it all?

The first flicker of hope was in the form of a publication in the Dancing Times in 1916. It was of a teaching syllabus that was devised by Edouard Espinosa and it was headed “What every teacher of Operatic Dancing Ought to know and Be Able To Teach.”

There was nothing in this article that had not been handed down from the masters of the past. He got a letter of congratulations from Madame Adeline Genee, who thanked Edouard for undertaking the crusade against bad teaching in the country. Edouard came up with the revolutionary notion that teachers of ballet should actually be examined on their work, but it couldn’t be put into practice straight away because of the war.

Espinosa continued to champion his syllabus and his plans for it. Eventually, in 1920 the Association of Operatic Dancing of Great Britain came into existence. The first meeting happened in the Oak Room at the Trocadero Restaurant in London on the 18th of July 1920. The dancers circle at that meeting were Espinosa, Genee, Karsavina, Lucia Cormani and Phyllis Bedells. These five represented the five different schools of teaching namely Bournonville, Imperial Russian, Italian, French and the English (such as it was). Thirty people sat down to dinner that night with some of the country’s best-known teachers. It was hoped to get those present to meet once or twice a year in order to exchange ideas and possible in time form an association whose aim should be to raise the standard of teaching and prevent incapable teachers from ruining young dancers with bad training.

Three months later the Oak Room was not large enough to house the meetings anymore.

From there a school for teachers was formed and Genee became the president. Everyone was very enthusiastic.

The first syllabus as Espinosa proposed it was very basic with just the easiest ballet steps to master. Teachers were only taken on if they were properly qualified to teach dancing. Annual subs were introduced at 1.05 pounds, which included entry into any examinations.

Two technical examinations were held each year and probationers who passed would be registered as full members after giving a guarantee that they would teach in accordance with the syllabus as laid down by the committee. 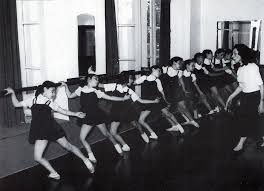 Some teachers were so good and well known already that when they applied for membership, they were accepted immediately without having to take the examination.

The simplicity of the first syllabus may have suggested to teachers that the examinations were easy to pass, but a surprisingly large number of teachers couldn’t cope with it, mostly because they had never been dancers and relied on the theoretical knowledge of technique.

Genee was asked to pose for photographs where she showed the correct positions of the arms. The five arm positions were thus born, eliminating much confusion.

By 1923, the first stage of the Advanced Syllabus had been set out by Espinosa including an extra theoretical examination for teachers over thirty years of age. The syllabus was extremely difficult and had to be simplified six months down the line.

In October 1923, the Association moved into its own premises at 154 Holland Park Avenue. It was a house with a beautiful ballroom which was ideal for examinations.

Next, a syllabus was brought in for ordinary once a week children, and they could also do their grade examination for a small fee. The requirements for grades 1 to grades 4 were considerably less than those needed for Elementary.

Queen Mary was very interested in the theater, even though the king did not share her enthusiasm, and though he discouraged her, she accepted an invitation to become the first Patron.

In this way, the queen could share her pleasure of the performing arts with the world.

In 1930 Edouard Espinosa resigned from the committee, but the reason was not known. He was accused of teaching his students the unset variations before examining them, so they could all pass. Dame Adeline Genee caught him out when she asked to see another enchainment during an exam session with Espinosa, and not the one he asked for.

Espinosa went off and founded the British Ballet Association with Louise Kay. It was a sudden and sad end to and extremely valuable association. His sister Judith took his place on the committee. He passed away in 1950.

In 1930 the move was made to abolish the old term ‘operatic dancing’ and replace it with classical ballet. Thus the Association of Operatic Dancing became the Royal Academy and the first issue of the Associations magazine was published in November 1930. It was entitled ‘The Operatic Association Gazette,’ which later became ‘Dance Gazette.’

In 1931, examiners began to visit Australia as the teachers in Melbourne and Perth paid for a tour. The first Australian Major Examiner for the Royal Academy Dance, Nellie Potts was appointed in 1955. There are strong ties even today between the Academy and Australia, and often dancers from Australia are very successful in the Genee Competitions.

Of course, nowadays, The Royal Academy Dance is represented worldwide. It is fair to say that the Academy’s original founders would be amazed at the size and scope of the organization today and they would be very proud.  The headquarters are still in Londen, but in much larger premises in Battersea, and the Royal Academy Dance keeps going from strength to strength.