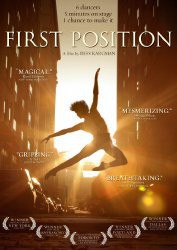 I first found out about the First Position Movie by reading the book Hope in a Ballet Shoe, which is the story of one of the dancers in the movie – Michaela DePrince.

After a lot of searching, I finally managed to get myself a copy of this movie, and it is something that I am going to watch again and again. I can’t believe that nobody here in South Africa seems to have heard of this, as it is a must watch for both dancers and sportsmen alike, as it shows what goes into being the best in your field.

Every year, thousands of aspiring young dancers enter into one of the world’s most prestigious ballet competitions, the Youth America Grand Prix, where lifelong dreams are at stake.

In the final round, with hundreds of dancers competing for only a handful of elite scholarships and contracts, practice and discipline are paramount, and nothing short of perfection is expected.

This was a office hit documentary done by Bess Kargman.

Her award-winning FIRST POSITION MOVIE follows six young dancers as they prepare for a chance to enter the world of professional ballet, via the Youth America Grand Prix, struggling through bloodied feet, near exhaustion and debilitating injuries, all while navigating the drama of adolescence.

The Youth America Grand Prix is one of the most prestigious ballet competitions in the world.

This documentary was released on Friday the 4th of May 2012.

Not only did this movie give viewers an unprecedented look at the pressure-filled world of ballet competitions, it also made stars of the talents it followed.

The first young dancer we met in the documentary was Aran Bell, an 11-year-old American studying in Rome. He loved BB guns and ballet, and had a wonderful sense of humor. And oh yeah, he was incredibly talented, with a natural ability to spin.

Today, Bell dances in American Ballet Theatre’s Studio Company. He’s certainly a little taller than he was during the First Position days, but he can still turn.

The gifted Michaela DePrince had a inspiring story behind her.

She was born in Sierra Leone, her parents were shot by rebels. With no one to take care of her, DePrince was put in an orphanage. She was eventually adopted by Americans Elaine and Charles DePrince, who enrolled her at The Rock School in Philadelphia. DePrince had an incredible balance of flexibility and strength, and was clearly going to go far.

De Prince eventually left Philly to study at ABT’s Jacqueline Kennedy Onassis School. She spent one year at Dance Theatre of Harlem before moving to the Dutch National Ballet as an apprentice. Since then, she’s taken on several principal roles at the company.

Joan Sebastian Zamora was a 16-year-old grown up. He was living in New York City during filming the filming of First Position, away from his parents in his native Colombia.

Zamora had wonderfully clean technique for such a young dancer. At the end of First Position, we learned that he was given a scholarship to study at the Royal Ballet School.

After graduating from there, Zamora joined the English National Ballet, where he danced for two seasons. He left in 2015 to come back Stateside and join The Joffrey Ballet in Chicago.

Rebecca Houseknecht’s story felt the most conventional of those First Position. She lived at home, went to a traditional high school, and she even tried cheerleading.

At Maryland Youth Ballet though, where she trained, she wasn’t your average dancer. Houseknecht had beautiful lines, and a natural ease to her dancing. Unfortunately, at the end of the film, we find out she didn’t place at the YAGP finals. But she was offered an invite to audition privately at Washington Ballet, and was hired to dance in the Studio Company.

After First Position, Houseknecht spend a year dancing professionally and then went on to study speech pathology at Towson University.

She seems to still be involved in dance though, as she teaches at the Maryland Performing Arts Center.

Californian Miko Fogarty was sort of what you would expect of a serious ballet-dancer-to-be. She left traditional schooling to do homeschooling so that she could spend more hours during the day dancing, and her mom was a stereotypically obsessive dance mom.

But all those sacrifices paid off. Fogarty’s dancing had a maturity well beyond her 12 years.

Since First Position, Fogarty went on to win tons of medals, including gold at the 2013 Moscow International Ballet Competition, silver and bronze at Varna, and a Prix de Lausanne Award.

She has gained a huge social media following. Her Instagram has more than 280,000 followers. She now dances with the Birmingham Royal Ballet.

Reviews for the First Position Movie:

“No one in our family has been especially drawn to ballet and yet we were totally immersed in this compelling documentary. First Position is one of those rare films which dancers probably won’t want to miss and non- dancers could find surprisingly enjoyable. I’m surprised it hasn’t received national attention and major press coverage- or has it and I somehow missed it?”

“The director of First Position offers a close-up and intimate portrait of a group of young dancers preparing to compete in an elite (and potentially life changing) competition and wisely steps back and lets the dancers, their instructors, and parents reveal the details of their lives.

It is amazing that some have even had the opportunity to dance. Michaela was adopted from Sierra Leone, miraculously beating the odds to come to America. Joan Sebastian only sees his parents a few times a year because he has to live in New York instead of Columbia to pursue his dreams. One girl is home schooled so there is more time for dance class, a life which seems very isolated but she is so passionate about ballet that she doesn’t appear to mind.

Until watching this film, I had no idea that ballet could cause so many injuries. Pain is taken for granted. I winced when I saw the blackened toenails, cuts and bruises which were revealed as the ballet shoes were removed.”

“It was a brilliant decision to reveal the daily lives of these dancers and to ramp up the suspense and reveal unexpected challenges as the competition drew near. By that time, we were rooting for each dancer and holding our breath as they performed in the finals.”

“I normally don’t write reviews, but I had to for this. I am a ballet dancer and thought it would be a cute documentary, but nothing really engaging. I was completely wrong! The amazing things the young people can do never ceases to amaze me. I highly recommend this feature presentation as soon as it is available on DVD. Meanwhile, I’m going to watch it a second and third time in the theaters.”

“As the grandmother of a dancer, this film portrayed the hard work and sacrifices that are made. However, it is not only the dancer that makes the sacrifices, but the family as well. The beauty of it all is amazing, but it is constant training. Just like a muscle builder a dancer must train daily. This film looks into the lives of 6 dancers, sometimes funny, but most of all it is inspiring, well done and a film to watch over and over. I don’t understand why this did not get national attention.”

“I watched this twice in 24 hours – once with my husband and once with my kids, ages 6-8. It was a hit with all of us, and only myself and one of my daughters actually likes ballet. It centers on several aspiring young dancers, ages 9-17, all of whom are training to compete in the most important world famous ballet competition, at which many scholarships and company positions are offered annually. It’s a make-or-break situation for all of these dancers, who have sacrificed their childhoods in pursuit of their art, and a career in it. The dancers profiled include an adopted orphan from war torn Sierra Leone, a teen Colombian boy who would be the first from his country to gain entry into a major ballet company, and many others, each with compelling personal dramas. Although the dancing is superb, it’s the personal stories that keep you engaged, and this film does a great job of telling them.”

You can purchase you copy of First Position

Ballet Documentary by clicking on the link.