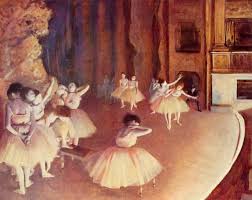 The Conservatoire Ballet is a Studio Ballet. This means that the setting for the ballet is in a dance studio. There have been many studio ballets being produced over the years.

Bournonville’s Conservatoire is built on memories of his life as a pupil in Paris.

This ballet was first produced with a story and in two acts by the Royal Danish Ballet in 1849 and later revived without  a plot in one act form.

Conservatoire ballet depicts a ballet lesson in a French dancing academy. Although fundamentally a reproduction of a ballet class, it is shrewdly choreographed for clever theatrical effect.

Conservatoire ballet has humor, charm and builds from simple steps and basic ballet positions to the most advanced steps known to dancers today. Many of the roles in this ballet are difficult and exciting to watch.

Danish choreographers have continued to make major contributions to this type of ballet with the most famous being Etudes by Harald Lander. The first performance of Etudes was given in Copenhagen in 1948 and has since been used in the repertories of many companies, including the Paris Opera, American Ballet Theatre, and the London Festival Ballet.

Etudes is described as a 20th-century extension of Bournonville’s Conservatoire Ballet, and this indicates the solid foundations and the increasing technical skills of classical dancers over the course of a century.

Continuing in the Conservatoire Ballet tradition, Kirsten Ralov and Fredbjorn Bjornsson choreographed Wednesday Class for the Royal Danish Ballet in 1973. Bournonville’s classes changed for each day of the week, but Ralov and Bjornsson used the Wednesday exercises as the framework for their ballet in a structure similar to the way Etudes was done.

In 1964, Flemming Flindt moved to the opposite end of the scale in his dramatic ballet The Lesson. In this ballet, he deals with the conflicts between teacher and student with the student ending up being murdered.

Another variation of the Conservatoire Ballet was Asaf Messerer’s Ballet School which was first performed by the Bolshoi Ballet in 1962. Ballet School is a theatricalization of a ballet class with the routines of many different classes mixed into this one lesson.

There have over the years been several plotless studio ballets presented for example Afternoon of a Faun and Three Preludes.

Afternoon of a Faun is quite interesting, as we find a young dancer alone in the studio watching his movements in the mirror, so the audience watches the ballet as if from the other side of the mirror. A girl enters and the two dance together and watch their united images in the mirror. They sink to the floor and the boy kisses her on the cheek. She touches her cheek then rises and leaves. The spell is broken and the boy lies down to sleep.

Three Preludes depicts a meeting between a boy and a girl on stage in the centre of which stands a ballet barre. They dance together with the barre as a third element in what essentially becomes a pas de trois.