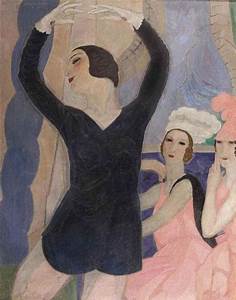 Les Biches Ballet is a one act ballet choreographed by Nijinska in a neoclassical style. The music is by Poulenc and the Decor by Marie Laurencin. Most of the music is choral and if you watch the ballet below this post you will hear that it sounds almost operatic.

Les Biches Ballet was first performed by Ballet Russes in Monte Carlo at the Salle Garnier on the 6th of Januray 1924. Nijinska danced the central role of the hostess.

The ballet was seen in Paris and London within a year of its premiere, and has been frequently revived there, however it was not produced in New York until 1950. Nijinska directed revivals of the ballet for several companies in the four decades after its creation.

The title of the ballet simply means ‘does’ and is portrayed on the drop curtain. Cocottes have been known to address each other as ‘ma biche,’ but none of this quite conveys the idea of a young girl ready for adventure. The ballet has no story, and depicts the random interactions of a group of mainly young people in a house party on a summer afternoon.

An English staging by the Markova-Dolin Ballet in 1937 was called The House Party, which suggested the setting. 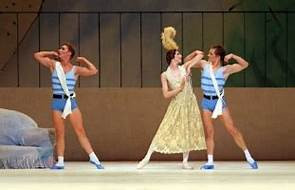 Marie Laurencin’s decor reveals a plain, airy drawing room, presumable in the south of France and it is here that the action takes place. In writing about the ballet, Poulene said:

‘Les Biches has no real plot, for the good reason that if it had it might well have caused a scandal. In this ballet, as in certain of Watteau’s pictures, ther is an atmosphere of wantonness which you sense if you are corrupted, but which an innocent-minded girl would not be conscious of….This is a ballet in which you may see nothing at all or into which you may read the worst.’

The eight number of the score each contain a dramatic idea.

First the twelve young girls in the party, pank-clad, partly innocent, partly wanton, then three heroes of the beach, all muscles and bathing suits, who tread a wary and deliberate path amonth the girls. They show little interest in the ladies at first, but the entry of an ambiguous figure in a blue velvet jerkin, white tights and white gloves, moving self absorbedly across the stage awakens the interest of one man in particular. (The figure, since it is danced by a girl, is always called the girl in blue, a piece of nice-mindedness that cannot disguise the fact that the character is, in fact, a pageboy, and the proclivities of at least one of the bathers are in no doubt at all.

The girls flirt and play with the athletes, and then bathe and the blue clad girl enters and dances, while the others peer inquisitively over the sofa. 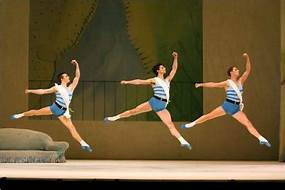 Now the hostess enters, a lady, in Poulenc’s words, no longer young, but wealthy and elegant, flaunting beads and cigarette holder, who flirts with the two remaining athletes during a rag mazurka.

When they leave, the athlete and the pageboy return to dance the lovely andantino. Next two girls in grey arrive. They are two dear friends, like girls from a Claudine novel, exchanging a kiss expressive of thei amitie particuliere, before they exit in different directions. The ballet ends with all the characters on stage in a brisk finale.

Les Biches is a delicious piece and is often compared to the Les Sylphides of the twenties in its romanticism. It is as light and airy in style as the decor and music, and yet exhaling a delicate, pungent air of sensuality. It is an understated fete galante where things are certainly not as pretty as they seem, mocking, witty, its slightly faisande aire is marvelously sustained.

It is a triumph of choreographic stylishness, a shimering soap-bubble that might so easily pop, but which Nijinska’s skill sustains from first to last. How lightly she treats of the passions, how sweetly they are masked under the air of almost febrile gaiety of the party, but how surely the choreography is made.

The cunningly different port de bras, the freshness of use of the classic dance, the clarity of texture in the movement all make Les Biches a delight. Without this soundness of the choreography it would never have lasted and still won its audiences as it does today.

Swan Lake Synopsis
Les Noces Ballet - Have You Heard Of It?
The Dream Ballet
Dame Beryl Grey Ballerina 'Of Note'