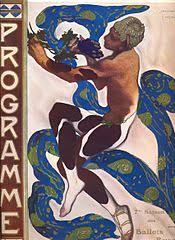 L’Apres-Midi d’un Faune was Nijinsky’s first ballet, and it was a ballet that was presented before it’s time. 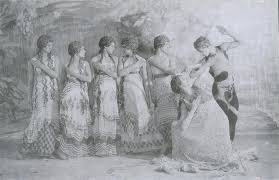 This is what the editor of one of the leading newspapers in Paris wrote the day after the ballet premiered:

‘I am certain that any of our readers who were present yesterday at the Chatelet will join with me in protesting against the extraordinary exhibition which they had the audacity to serve up to us in the guise of a serious work.

This is neither a pretty pastoral nor a work of profound meaning. We are shown a lecherous faun, whose movements are filthy and bestial in their eroticism, and whose gestures are a crude as they are indecent.’

This article reflects the tremendous controversy caused by L’Apres-Midi d’un Faune at the Theatre du Chatelet on the 29th of May 1912.

The outrage was induced by the closing moments of the ballet when Nijinsky (who danced the title role in his ballet) lowered his body onto a veil in a stylised act of sexual consummation. 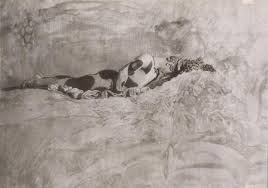 Ther have been many debates on the exact nature of Nijinsky’s final gesture for decades after.

Nijinsky as a new choreographer explored a new style of movement which was inspired by the art of Ancient Greece.

He dispensed with the principles of classical ballet, striving to achieve a freeze like effect by moving his dancers in profile on a two-dimensional plane in an attempt to capture the style of the Greek paintings that he had seen.

Leon Bakst designed a beautiful setting which included a glad of dappled grey-green and brown which formed an impressionistic background to his very detailed costumes.

The characters in the ballet included a Faun and seven nymphs who intrude on his afternoon. Nijinsky wore cream bodytights with large irregular circles of brown painted on at various intervals. Across his middle was a garland of vine leaves and he wore a cap of golden hair on his head with two horns. In place of ballet slippers, he wore golden sandals.

His ears were lengthened with flesh coloured was and were made pointy at the end. His aim was not to imitate, but bring out the impression of a clever animal who might be human.

This ballet has rarely been performed again since its premiere season, as its controversial nature superceded its choreographic novelty.

A notable exception is an American Choreographer Jerome Robbins 1953 version. Afternoon of a Faun, which transfers the setting from a sun-dappled glade to a ballet studio from the Greece of antiquity to our own time.

I was lucky enough to see Graham Gardner’s African inspired version of L’Apres-Midi d’un Faune in 1988 when Pact Ballet in South Africa did the production with Jeremy Coles and Catherine Burnett as the male and female figures and Gavin Louis in the title role.