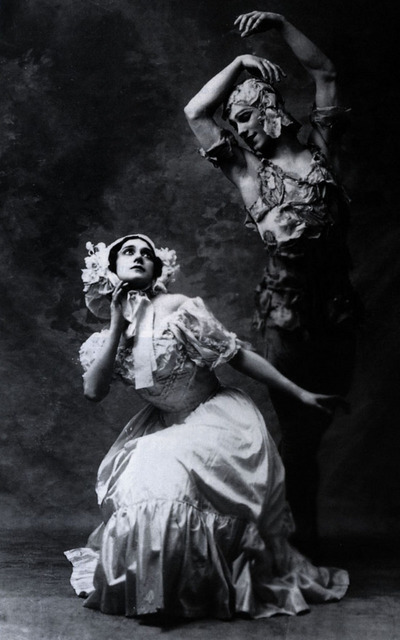 Le Spectre De La Rose is a ballet in one act (choreographic tableau) about a young girl who dreams of dancing with the spirit of a souvenir rose from her first ball.

Jean-Louise Vaudoyer based the ballet story on a verse by Theophile Gautier.

The original sets and costumes were designed by Leon Bakst.

Le Spectre De La Rose Ballet was first presented on the 19th of April 1911 at the Theatre de Monte Carlo by Ballets Russes.

The ballet was a huge success, and it especially became famous for the spectacular leap that Nijinsky made through a window at the end of the ballet. At the time critics praised this seemingly superhuman feat.

Unfortunately today we have no way of knowing just how high Nijinsky did in fact jump. It is possible that it was no higher than many dancers who have followed him in the role over the years, but the effect that he created through the quality of his elevation was immense and unforgettable.

When choreographer Mikhail Fokine was working on the storyline for Le Spectre De La Rose, there was little to suggest that the ten-minute ballet was destined for fame. Nijinsky’s sister, who was also a great choreographer in her own right, felt disappointed when watching rehearsals at the mundane looking enchainements without any innovation. However as the rehearsals progressed, it became increasingly apparent that Nijinsky’s instinctive and total understanding of the role would illuminate the ballet in an extraordinary way.

The first Le Spectre de la Rose was not acclaimed exclusively for Nijinsky’s performance, but also the interaction of the dancer with his ballerina, the serene and beautiful Tamara Karsavina, who ignited the richly romantic aura of the ballet. Karsavina created a gentle balance to Nijinsky’s bounding, swirling spirit, and both of them shone.

Le Spectre de la Rose has been revived regularly by many ballet companies in all parts of the world and remains a challenge in which dancers of each new generation continue to set their sights upon.

The story unfolds in a young girl’s bedroom, painted in white with its windows open to the summer night. The girl has just returned from her first ball holding a rose to her lips and breathing in its scent.

Dreamily, she removes her cloak and sinks into a chair and falls asleep to dream of the ball.

Suddenly a spirit, half-youth, half-rose, floats into the room through the open window. Like a petal, blown in by the wind, he barely touches the floor as he dances. As he dances he bends over the sleeping girl and draws her into the dance.

But the dream cannot last and he leads her back to her chair, brushes her lightly with his lips, and is gone.

Her eyes open, and she stoops to retrieve the rose whose scent recalls her dream.

This is one of the only resources that I could find today, and believe it or not only on VHS. Really strange.

This composition in the style of the romantic ballet illustrates exactly Fokine’s contention that the technique of the classical ballet should be used only where it is appropriate.

Le Spectre de la Rose is a classic pas de deux with the dancing used in leaps and bounds to evoke an ethereal being, the spirit of the rose, rather than to display an extraordinary technique.

The arm positions used in this ballet are far from the ‘correct’ port de bras arms used in ballet as they are meant to be alive and speak and sing, and not just execute positions. So even though the legs are purely classical the dance style suggests the product of a young girl’s romantic imagination.

Here is a video of the ballet for you to enjoy.