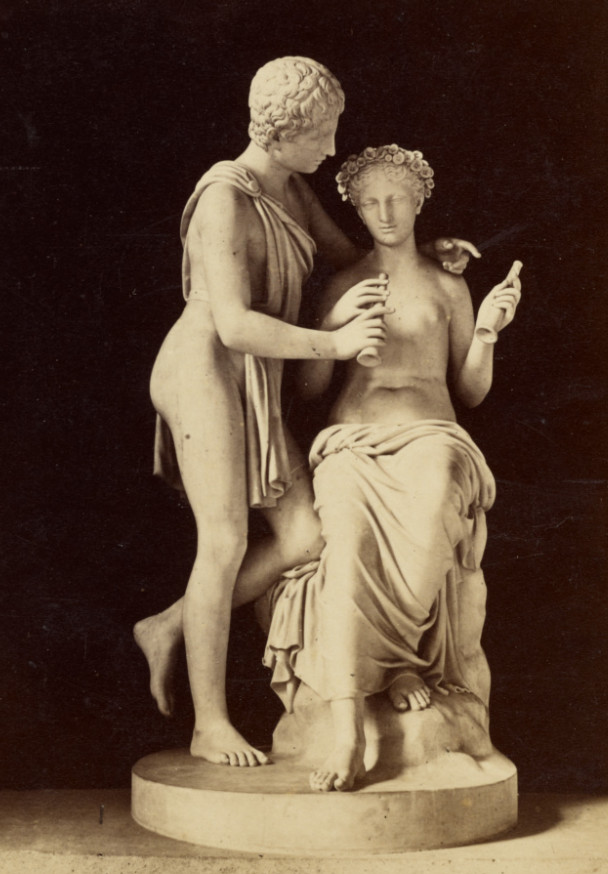 Daphnis and Chloe is a ballet that was re-choreographed in one act with three scenes by Sir Frederick Ashton. This version was first performed by Sadler’s Wells Ballet at Covent Garden on the 5th of April 1951.

This ballet was actually done for the first time on the 8th of June 1912 by Ballets Russes with Vaslav Nijinsky and Tamara Karsavina, but the later version by Ashton is better known by most ballet companies.

Maurice Ravel did the music and the decor was done first by Leon Bakst and then by John Craxto.

The first dancers who danced this ballet for Frederick Ashton were Margot Fonteyn as Chloe and Michael Somes as Daphnis. Violetta Elvin was cast as Lykanion, John Field as Dorkon, and Alexander Grant as Bryaxis.

The Story Of Daphnis And Chloe

This ballet has a Greek theme to it.

The stage is set with a sacred grove before the cave of Pan. A group of young shepherds and shepherdesses are bringing gifts to the God Pan and dancing in his honor. Amongst the dancers are Daphnis and the girl he loves Chloe.

Dorkon, who is another shepherd has also fallen in love with Chloe, and after he has paid rough and lusty attention to her, which she rejects, there is a dance contest arranged between Daphnis and Dorkon in which Dorkon’s course dancing is easily outshone by the grace of Daphnis.

After Chloe has given Daphnis a kiss as the winner, she leaves with her friends, leaving Daphnis alone to dream of her.

Lykanion, a beautiful girl appears and makes determined advances to him and he is excited by her, but quickly dismisses her.

The scene is suddenly invaded by pirates who pursue the village girls and they capture Chloe. Daphnis who is held by Dorkon cannot rescue her and he sinks to the ground in dispair.

The nymphs of Pan appear, waken Daphnis and reveal the god Pan to him. He prays that the god will help him to recover Chloe.

This scene is set in a pirate camp. The pirates are celebrating their raid and Chloe is brought in with hands bound by the pirate chief Bryaxis, who is determined to keep her for himself.

She pleads with him, but he is adamant.

Just as he is about to attack her, the god Pan appears and Chloe’s bonds mysteriously fall off. The pirates cower in terror and the god leads Chloe away.

The scene is a sea shore. Daphnis is lying in despair as dawn breaks. His friends come to console him and he learns that Chloe has been restored to him. They are reunited with general rejoicing.

The History Of Daphnis and Chloe

Daphnis and Chloe is an ancient Greek novel written in the Roman Empire and is the only known work of the second-century AD Greek novelist and romance writer Longus.

In 1909 Maurice Ravel was commissioned by Diaghilev to write the score for Daphnis and Chloe, with choreography by Fokine. The ballet was first given three years later with Karsavina and Nijinsky as the two lovers, and the beautiful classic setting by Leon Bakst. In his version, Ashton rejects the idea of an ‘antique’ appearance, and his choice of a designer for the work fell on John Craxton who was a painter who knew and loved Greece. The result was a staging that happily caught the timeless quality of Longus’ great love story despite the modern dress.

The choreography has some of Ashton’s loveliest writing, and he avoided any archaisms in the general dances of the first act which recapture the feeling of ritual and homage to the god in simple and beautiful terms.

The contrasted dances for Daphnis and Dorkon, and the fierce passion of Lykanion, are all dramatically exciting, and the pirates’ dances in the second scene are excellently crafted.

It is in the final scene that the ecstasy of the two reunited lovers and the joyous gaiety of their friends are so wonderfully expressed.

The ballet was misunderstood by the majority of the critics after its premiere, but continued acquaintance soon recognized that it is in fact one of Ashton’s most moving and rewarding short ballets.