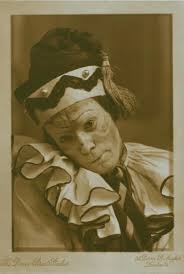 If you are looking for the Ballet Petrushka Synopsis, you can scroll down a little, but first a little history.

Petrushka is considered a Burlesque ballet and it is done in one act and four tableaux. It was first performed by Ballets Russes at the Theatre du Chatelet in Paris on the 13th of June 1911.

The choreography was done by Fokine and the music was composed by Stravinsky.  The scenery and costumes were designed by  Alexandre Benois.

Of all the masterworks that were created by the Diaghilev Ballet, Petrushka is generally considered the greatest because it is the supreme example of the perfect collaboration.

Butterweek Fair was recreated from the childhood memories of Alexandre Benois and stimulated by Stravinsky’s short piece, Petrushka’s Cry, which had first roused Diaghilev’s interest in the ballet theme.

This ballet is a great example of a plot within a plot. It is filled with national and traditional dances of the people at the fair. The music that Stravinsky composed was music within music. The second part of the music describes the principal characters, both their outer appearances and their inner feelings.

Petrushka also shows quite vividly the motivating principle of Fokine’s revolution. He sought to make ballet a powerful art in its own right, not just spectacular entertainment. To do this within Petrushka he used images and symbols like poetry.

Petrushka portrayed the downtrodden, the Ballerina was a symbol of empty womanhood and the Moor personified all smug, self-satisfied people.

So all in all Petrushka was a perfect fusion of music, design, and dancing to communicate a message with meaning.

This process is clearly shown through Petrushka himself. Benois created his outer form in the costume and grotesque make-up of the puppet. Then the torment of his inner personality is revealed in Stravinsky’s music. His relations and conflict with the outside world are portrayed in the choreography. His turned in position depicts his introvert nature while the Moor’s turned out second positions depict him being an extrovert.

The corps de ballet creates the seething life of the fair and nothing in the dancing is virtuoso. Everything is expressive and the principles of romanticism are translated into this character ballet.

This scene takes place in Admiralty Square, St Petersburg in 1830, during the Butterweek Fair.

Hawkers, dancing girls, gypsies, and showmen of all kinds and their customers fill the square. One of the showmen is dressed as a magician and calls attention to his curtained booth with a drum roll. 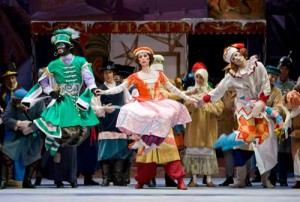 He shows the crowds three of his puppets, a pretty doll-like Ballerina, a sad-faced insignificant Petrushka and the foolish, but splendid Moor.

With a touch of his wand he seems to bring them to life and they dance and chase each other around the square.

Petrushka is in his cell inside the booth. He bemoans his fate and his hopeless love for the Ballerina. He complains about his subservience to his master the showman and his suffering inside his puppet’s body. When the Ballerina visits him, his agitation frightens her away.

In the Moor’s cell, the Moor plays idly with a coconut. He is stupid and coarse and thinks only of his material needs. The ballerina visits him and exerts her charms to arouse his interest. She succeeds but in the midst of their duet, Petrushka forces his way into the cell. The Moor attacks him, stamps on him and kicks him out.

At the fair the crowd becomes aware of tumult behind the curtains of the showman’s booth. Petrushka runs out, pursued by the Moor and the Ballerina. Cut down by the Moor’s scimitar, Petrushka dies in the snow.

The crowd is horrified by the tragedy and angrily summon the Showman, but he picks up the body and reveals it as only a puppet of cloth and sawdust.

The crowd drifts away and the Showman turns for home, dragging the puppet behind him. Suddenly he hears a cry. Above the booth appears the ghost of Petrushka, defying him for the last time.  The Showman is terrified and he runs from the scene as the figure of Petrushka falls inanimate once more over the edge of the booth.

That’s it for a short and sweet Petrushka Synopsis.

Here is a full copy of Petrushka for you to enjoy.

5 thoughts on “Petrushka Synopsis And A Brief History”