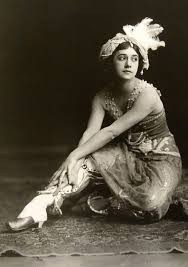 Tamara Platonovna Karsavina was born in St. Petersburg on the 10th of March 1885.  She was the daughter of well-known dancer Platon Karsavin and she was lucky enough to study ballet dancing under famous teachers Paul Gerdt and Enrico Cecchetti at the famous Imperial School.

Due to his own bitter experiences, Platon initially refused to allow Karsavina to study ballet, but her mother interceded.

“Mother’s dream was to make a dancer of me,”  Karsavina later wrote. “It is a beautiful career for a woman,” she would say, “and I think the child must have a leaning for the stage; she is fond of dressing up, and always at the mirror.” 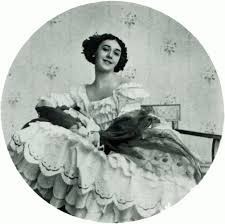 Without seeking Platon’s permission, Karsavina’s mother arranged for her to begin taking lessons with a family friend, the retired dancer Vera Joukova.

When Platon learned months later that his daughter had begun dancing lessons, he took the news in his stride, becoming her primary instructor.

Far from receiving preferential treatment, however, Karsavina referred to her father as her “most exacting teacher… and to the tune of his fiddle I exerted myself to the utmost.”

In 1894, after a rigorous examination, Karsavina was accepted at the Imperial Ballet School.

After graduating early from the Imperial School, due to financial constraints, she ended up becoming a principal ballerina with the Imperial Russian Ballet and danced the entire Marius Petipa repertory.

Her most famous roles were Lise in La Fille Mal Gardee, Medora in Le Corsaire and Tsar Maiden in The Little Humpbacked Horse.  She was also the first ballerina to dance the Le Corsaire Pas de Deux in 1915.

She started dancing with Ballet Russes late in 1910 and then she joined up with Diaghilev’s company, where she created major roles in the Firebird (which Anna Pavlova turned down), Petrushka, and Spectre de la Rose among others.

Tamara Karsavina made up a legendary partnership with Nijinski.  She and Anna Pavlova were known to have a bit of rivalry between them, and in one performance the shoulder strap of her costume came loose exposing her.  Pavlova reduced an embarrassed Tamara to tears. 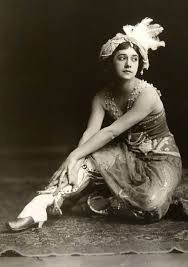 Tamara Karsavina was renowned for her beauty, and many artists used her in their portraits.

In 1915 her first marriage to ardent balletomane Vassili Mukhin was dissolved. In 1917 she settled in London and married diplomat Henry James Bruce.

In 1918 after years of war fraught with ever-increasing hardship, she left Russia and came to England which remained her home from then on.

She was one of the founders of the Operatic Association which later became known as the Royal Academy of Dance.

The Royal Academy of Dance is now the worlds largest examining and teaching organization.  She was vice president of the association for over thirty years.

She taught ballet dancing and wrote a lot about the world of ballet.

Her writings include articles on technique for the journal Dancing Times, her autobiography Theatre Street (1930), and the text Classical Ballet: The Flow of Movement (1962).

Amongst her pupils, she taught two famous ballerinas absolute, Dame Alicia Markova, who was the first British dancer to hold the rank of Prima Ballerina, and Dame Margot Fonteyn.  She also taught Mari Bicknell, who was the founder of Cambridge Ballet Workshop.

Tamara Karsavina became recognized as one of the founders of modern British ballet.  She also assisted in the establishment of The Royal Ballet. 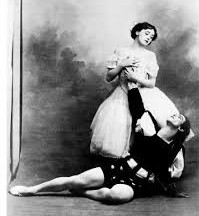 Even as she aged, Tamara Karsavina could still reduce a crowded room to admiring silence merely by the manner in which she made her entrances.

She was greatly underused and neglected by the management of the Royal Ballet and only occasionally assisted with the revivals of the ballets in which she danced.

She coached Margot Fonteyn and Rudolf Nureyev in Spectre de la Rose and in 1959 advised Sir Frederick Ashton when he did the revival of La Fille Mal Gardee.  She taught him the original mimed dialogue for the famous when I am married scene.

Tamara Karsavina was gifted with a perfectly proportioned body, a warm rich personality, and was a dark languorous romantic beauty eyes and feet that spoke to her audiences.

She had high and soft elevation, brilliant beats, swift turns and a noble bearing that was unaffected and modest. It is said that her port-de-bras were lovely beyond belief.

Her ability to completely identify herself with a character can only be compared with those of the great Soviet ballerina Ulanova.

You can read more about her extraordinary life here.