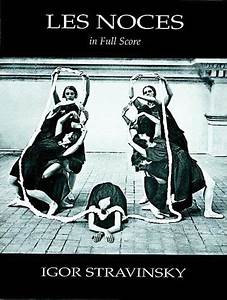 Les Noces Ballet is done in one act and was choreographed by Nijinska. The words and music were done by Stravinsky and the decor by Natalia Goncharova.

Les Noces Ballet was first performed by Ballets Russes in Paris on the 14th of June 1923.

The ballet has four scenes:

You will see that the ballet is done to opera-type music with a singer, which wasn’t all that common at the time the ballet was written. It seems that Nijinska enjoyed doing different pieces with singing voices.

The work is usually performed in Russian or French, but English translations are sometimes used, and Stravinsky used the English one on the recordings he conducted for Columbia Records in 1934 and 1959.

Stravinsky originally conceived the idea of a divertissement based on the traditional ceremonies of Russian peasant weddings in 1914, and he made an abstraction of those elements of liturgy and folk-experience that are their basis.

He saw the work as a masquerade and he reluctantly agreed to Diaghilev’s staging which did not correspond to his original plan which was with singers, musicians and dancers mingled on stage.

Then Nijinska came along and sought to lay bare the ritualistic elements underlying peasant ceremonies, and aided by the stark simplicity of Goncharova’s final setting and costumes (earthy browns and black and white) she made a ballet that reached the very essence of peasant life.

The Bride and groom are the two central icon figures at the heart of the dancing. In scene 1 the bride is blessed by her parents as her friends dress her long plaits. the dancing is solemn and simple and there is a use of point work that stresses the abstract quality of the whole concept.

The second scene is in complete contrast with the blessing of the groom who is surrounded by a stamping whirlwind of his friends while he stands still. After he has been blessed by his parents, we return to the bride’s house. Her plaits are wound around her, and the groom’s friends come to escort her to the church and as she leaves, her mother mournes her departure.

In the final scene, the bridal party is seen on a raised inner stage while below them there are the joyous festivities of the guests. The women are meekly lyrical while the men stamp and pound the earth with their enormous energy. Two soloists are called upon, to sum up, certain moments of the work in what are, in effect, variations.

The Bride and Groom move into a bedroom that can just be seen at the side of the inner stage, the door is closed, and the curtain is pulled to hide the hole of the inner stage while down below the guest forms a final pyramid shape which is an architectural theme in the choreography throughout the work, as the bells ring out in the score.

Diaghilev wept when he first heard the score as it was a deeply nostalgic work. It was a glance back at the world that died with the Revolution and it was the Diaghilev Ballet’s last look at Holy Russia. The fruit of exile by war and social change.

Les Noces is the most authentically nationalist of Diagnilev’s post-Fokine Ballets, and after its creation, he was never to look East again, save for the late, unsuccessful flirtation with Soviet ideas in Le Pas d’ Acier.

In the Royal Ballet’s scrupulous staging at Convent Garden on the 23rd of March 1966, Les Noces compels attention and admiration by the skill of the conception, and by the continued novelty of Nijinska’s choreographic inspiration.

It is in the best sense and abstract ballet. Depersonalized, yet warm with humanity, it catches a whole social attitude, translates it into theatrical form, and never loses touch with its roots in human experience. The actual dance language is amazing and everything looks simple, inevitable, but the underlying structure is rhythmically very complicated.

Nijinska uses the dancers as blocks of movement, great shapes of corporate activity that contrast the soft, yielding femininity of the women with a thick muscular style from the men. The work has an extraordinary momentum which builds up through a gradual crescendo until the final scene. 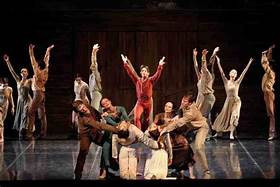 Les Noces received a mixed reception to its early performances. While its premiere in Paris in 1923 was welcomed with much enthusiasm, the London performance three years later received such a negative response from critics.

On June the 18th 1926, H G Wells wrote an open letter. “I do not know of any other ballet so interesting, so amusing, so fresh or nearly so exciting as Les Noces… That ballet is a rendering in sound and vision of the peasant soul, in its gravity, in its deliberate and simple-minded intricacy, in its subtly varied rhythms and deep undercurrents of excitement, that will astonish and delight every intelligent man or woman who goes to see it.”

5 thoughts on “Les Noces Ballet – Have You Heard Of It?”