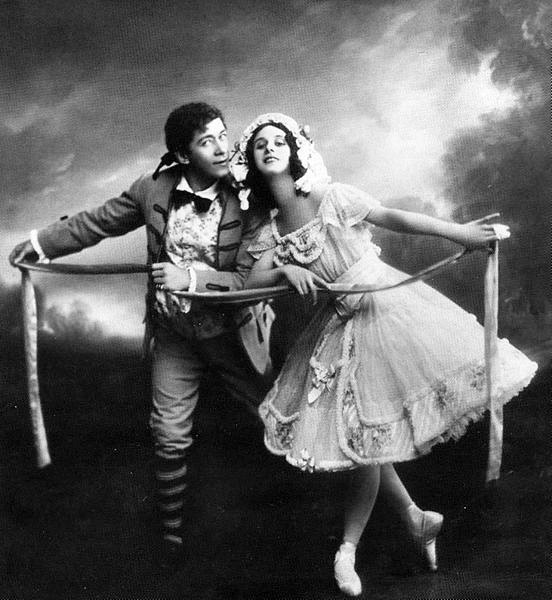 The La Fille Mal Gardee Ballet is one of my favourites. It is light-hearted and funny, and a ballet that I could watch again and again.

Some of the first productions of this ballet were known simply as “Fille.” La Fille Mal Gardée is one of the oldest and most important works in the modern ballet repertory, having been kept alive throughout its long performance history by way of many revivals. The original ballet was the creation of Jean Dauberval, who was one of the greatest choreographers of his day.

Legend has it that Jean Dauberval found his inspiration for La Fille mal gardée while in a Bordeaux print shop, where he saw an engraving of Pierre-Antoine Baudouin’s painting Le Reprimande. The painting was a picture of a girl in tears being berated by an old woman in a hay barn while her lover can be seen in the background scurrying up the stairs to the safety of the loft.

The ballet’s original title was Le Ballet de la Paille, ou Il n’est qu’un pas du mal au bien “(The Ballet of the Straw or There is Only One Step from Bad to Good)”. The work was extremely popular with the public and proved to be Dauberval’s most popular and enduring work.

The work has undergone many title changes and has had no fewer than six scores, some of which were adaptations of older music.

The La Fille Mal Gardee Ballet as we know it today premiered on the 28th of January 1960. The Royal ballet presented what was to become one of the treasures of the company and a major classic of the 20th century. This was Sir Frederick Ashton’s version.

While Ashton was preparing for this he received valuable advice from Tamara Karsavina who was well known for her role of Lise in Fille when she had danced it at the Maryinsky Theatre. She taught Ashton Lise’s famous mine scene in the second act in which Lise imagines herself married to Colas. Tamara also furnished details dating back to before the Petipa-Ivanov production of 1885, including some of the fragments involving the use of the ribbon in the first act pas de deux.

Ribbons were used in the ballet as early as the 1803 production in Paris.

Ashton was not merely attempting to reconstruct an earlier ballet from bits and pieces that were remembered and gathered from the archives. He created a work described by Karsavina as “a charming period piece singularly compatible with the artistic trends of today.”

Lise, who is the only daughter of Simone, a widow and owner of a prosperous farm, is in love with Colas, a young farmer. Unfortunately, her mother has far more ambitious plans for her daughter.

I love the way the La Fille Mal Gardee Ballet starts with a dance done by birds. Another busy day on the farm is heralded by a cock and his attendant hens.

Lise who is disappointed at not seeing Colas leaves a ribbon tied in a lovers’ knot as a token of her devotion.

Colas finds it and binds it to his staff. The lovers meet but are interrupted by Simone, who gives her daughter the task of churning the butter. Colas hides in the loft then accompany’s her. The work is shared and then forgotten as they declare their love.

The farm girls arrive and summon Lise to join them, but her mind is elsewhere. Her ever-watchful mother catches hold of her and chastises her. Just then Thomas, the pompous and wealthy proprietor of a vineyard, arrives with his son Alain.

Simone aware of their mission dismisses Lise. Thomas asks Simone for Lise’s hand in marriage for his son, and when Lise returns, Alain, coy and clumsy shows off his paces. Lise is amused and a little shocked by his antics, but definitely not interested.

They all set off to the harvesting fields.

It is harvest time, and after working in the fields, the harvesters, led by Colas, relax in a joyful dance. Lise and Alain dance but Colas cuts in and the young girl makes it clear where her preference lies.

The field is not left clear for the triumphant Colas, who dances with Lise. Simone joins in the merriment, but a storm drenches them scattering everybody far and wide.

Interior of the Farm

Simone and Lise are soaked by the rain and return to the farmhouse. They sit down to spin as Simone thinks that work will keep Lise out of mischief. Simone falls asleep and Lise tries to steal the key from her. Simone awakens, and in order to remain watchful, plays the tambourine for Lise to dance. She nods off to sleep again. Lise runs to the door and flirts with Colas through the bars. The knocking of the harvesters, coming for their pay, awakens Simone. Colas sneaks into the house in the commotion.

Simone tells her daughter to get on with her chores as she leaves to give the harvesters a drink. Lise, thinking she is alone dreams of the delights of married life. Colas cannot resist, and comes out of hiding. She is bashful at having been taken by surprise, but once again they declare their love, exchanging scarves as a token.

As Simone returns, Lise hustles Colas into her bedroom. The ever-suspicious mother realises that the lovers have been meeting and locks Lise in the bedroom.

Alain and his father arrive with a notary to complete the contract. When it is signed, Simone hands Alain the bedroom key. After a moment of idiotic indecision he opens the door and to everyone’s dismay Colas and Lise emerge.

The lovers fall on their knees to ask Simone for forgiveness and a blessing. In spite of the fury of Thomas and Alain and urged on by the notary and villagers, she finally gives in amidst general rejoicing.

Here is a video of the famous clog dance that the Widow Simone does from the La Fille Mal Gardee Ballet, which is a lot of fun to watch.

If you have anything else to add on the La Fille Mal Gardee Ballet, please add your comment below.

Serge Diaghilev - Some History For You
Coppelia Ballet Story
How We Make Use Of Mime In Ballet
An Old Ballet For You...About A Horse