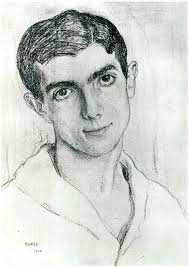 Leonide Massine, who was also known as Leonid Massine was a famous Russian choreographer and ballet dancer. Leonide Massine created the world’s first symphonic ballet, which was called Les Présages, and then many others in the same vein. 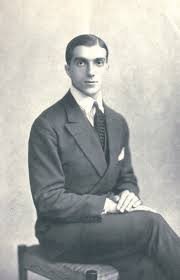 There is a little confusion about the year that Leonide Massine was born. Some state 1896, others 1895, and the encyclopedia I found said 1894, so I am a little confused about the exact year here.

He was born in Moscow, and he studied at the Imperial Ballet School there before he joined the Bolshoy Company in 1912.

His interest was in acting and dancing and he had even considered giving up dancing in favor of acting. But in 1913 Diaghilev came to Moscow in search of a dancer to take the leading role in the projected Legende de Joseph, which was to have stared and been choreographed by Nijinsky. So Massine jumped at the opportunity.

But Diaghilev had broken off with Nijinsky, following his marriage, so the young Massine was promptly offered the role of Joseph, and set to work with Maestro Cecchetti, who was the ballet master at the time to the Diaghilev Company.

La Legende de Joseph had its first performance in May 1914, but the declaration of war later that summer brought an end to the first great Russian period of Diaghilev Ballet.

Massine stayed with the nucleus of artists that surrounded Diaghilev in Switzerland, being educated in the usual Diaghilev manner by visits to galleries and close contact with creative artists and musicians, as well as working with Cecchetti. 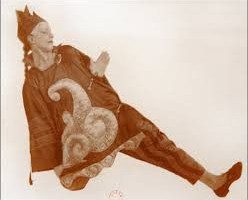 Diaghilev was actually grooming him for choreography. In 1915 he staged his first ballet, Soleil de Nuit. It was a success and initiated the long sequence of ballets that extend to recent times.

To Diaghilev’s dismay, Massine followed the same path as his predecessor Nijinsky and got married to the first of his four wives in 1921. Diaghilev called him an ingrate, saying, “Nothing but a good-looking face and poor legs.”

Massine continued to choreograph for every major company including three years as lead dancer and choreographer for the Roxy Theatre in New York City. In 1945 and 46 he formed his own company called Ballet Russe Highlights.

As a dancer, he demonstrated throughout his life a tremendous skill in character roles and many of his ballets reflect this same quality.

In the 1930s he had great success by creating symphonic ballets. His first, Les Presages, in 1933 used Tchaikovsky’s Fifth Symphony. After this, he did Choreartium in 1933 to Brahms’ Fourth Symphony and La Symphonie Fantastique to Berlioz’s work of the same name.

In 1938 he used Beethoven’s Seventh Symphony for Septime Symphonie and he made another called Rouge et Noir in 1939 to Shostakovich’s First Symphony.

He is best known today, though, for the early ballet’s that did so much to enhance post-war Diaghilev seasons like:

Leonide Massine was a man of many intellectual gifts and he experimented with a notably adventurous spirit in ballet, as with his symphonic works.

His Parade (1917) was a Cubist manifesto, and in America, in the 1940s he collaborated with Salvador Dali in producing a series of surrealist ballets:

The early masterpieces of the Diaghilev era seemed the most likely to survive. Here he introduced to the Ballet Russes the dramatic tradition of the Moscow company from which he came, basing himself not on the classical canon directly, but rather on that canon as modified by Michel Fokine.

Building on what Fokine began, he developed enormously the character ballet and character dancing through a personal language that drew particularly on national sources and extended the use of the corps de ballet through his orchestration of mass movement on stage.

He used the later years of his long life to reviving his ballets for companies all over the world and to his theoretical study of the essentials of choreography.

Some of this study was tested and worked out on students of the Royal Ballet School where he became a guest teacher in 1969, thus contributing to the creation of the school’s present choreographic department.

You may remember Leonide Massine, because of his portrayal of the ballet master and shoemaker in the 1948 film The Red Shoes. He also had a part in The Tales of Hoffmann in 1951 and a cameo appearance in Powell’s later film Honeymoon in 1959.

Massine was for twenty years considered the Western world’s greatest choreographer, but in later life, he was overshadowed by George Balanchine.

In 1968 Massine published his autobiography, entitled My Life in Ballet.

In his youth, Massine was the protégé and lover of Diaghilev.

He had two children with his third wife Tatiana Oriova, a son, Leonide Massine II, and a daughter, Tatiania. He and Orlova divorced in 1968.

He subsequently married Hannelore Holtwick, with whom he had two sons, Peter and Theodor, and made his home in Borken, West Germany, where he died on the 15th of March 1979.

Puberty And Ballet - Do They Mix?
How To Dance Musically
Ballet Turnout - The Good And The Bad
How To Get More Students For Your Dance Studio