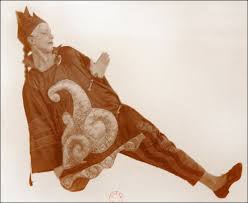 The Parade Ballet was first performed by Sergei Diaghilev’s Ballets Russes at the Theatre du Chatelet in Paris on the 18th of May 1917.

It is also known as Picasso Parade Ballet and it was a surrealistic ballet done in one act. The Libretto was done by Jean Cocteau, the choreography by Leonide Massine, the music by Erik Satie, and the decor by Pablo Picasso. The music was added to with the use of milk bottles, a typewriter, and a foghorn in the background.

What Is Parade Ballet All About? 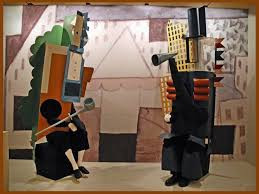 The atmosphere of this ballet is one of a parade. That is a parade of artists which circuses and small touring theatre companies often offer the public before a performance in order to advertise their presence and attract an audience for themselves.

A drop curtain, revealed during the overture, depicts the interior of a booth and a miscellaneous group of performers waiting for their call.  When the second curtain rises the scene shows the exterior of the booth.

In front of it pacing to and fro is the French manager. One by one there appears during the ballet the following performers:

They are joined in their appeals to the public by a manager from New York and a pantomime horse.

The trouble is that they try far too hard, and at the end of the parade the public cannot believe there is anything more to see that is worth paying for.

The curtain slowly falls to hide this tragedy of misunderstanding.

The Picasso Parade Ballet is not only a satire on well-known music-hall types of the period but also a tragic comedy in miniature form. Its significance as a ballet is its early place in the Massine canon. It was his third work after Soleil de Nuit and Les Femmes de Bonne Humeur.

The Parade Ballet was revived only once by Diaghilev in 1920, but it has been revived more recently by Bejart’s Ballet of the Twentieth Century in 1964, City Centre Joffrey Ballet (1973) and London Festival Ballet (1974).

The premiere of the ballet resulted in a number of scandals. Some of the audience booed and were very unruly, nearly causing a riot before they were drowned out by enthusiastic applause, although many of their objections were focused on Picasso’s cubist design.

“According to the painter Gabriel Fournier, one of the most memorable scandals was an altercation between Cocteau, Satie, and music critic Jean Poueigh who gave Parade an unfavorable review. Satie had written a postcard to the critic which read, “Monsieur et cher ami – vous êtes un cul, un cul sans musique! Signé Erik Satie” (“Sir and dear friend – you are an arse, an arse without music! Signed, Erik Satie.”). The critic sued Satie, and at the trial, Cocteau was arrested and beaten by police for repeatedly yelling “arse” in the courtroom. Satie was given a sentence of eight days in jail.” (Sourced from Wikipedia)

Here is a video of the ballet. Notice how different some of the steps and choreography was in those days.