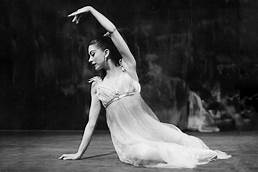 Ondine the ballet is done in three acts and was choreographed by Sir Frederick Ashton.

The music was done by Hans Werner Henze and the decor by Lila de Nobili.

Ondine the ballet was first performed by the Royal Ballet at Convent Garden on the 27th of October 1958. It has since been staged by other choreographers.

From its première in 1958 until the work was removed from the repertoire of the Royal Ballet in 1966, nearly every performance of Ondine saw Fonteyn cast in the lead role, with the only occasional exceptions seeing Nadia Nerina and Svetlana Beriosova dancing the role.

Maria Almeida became the first ballerina to dance the role of Ondine in a revival, with Anthony Dowell dancing the role of Palemon. The first major revival of this Ashton/Henze production was staged in 1988 and conducted by Isaiah Jackson, the revival was a success and the ballet has been regularly performed ever since.

In the original production, Margot Fonteyn was Ondine and Michael Somes danced Palemon. Julia Ferron was Berta and Aleander Grant was Tirrenio.

Here is a snippet at a more modern version of Ondine The Ballet. Unfortunately I couldn’t find a video online of Margot Fonteyn doing the ballet, even though I have a video of her in my collection doing the some of the ballet.

Berta has returned from hunting and Palemon courts her by offering her an amulet which she rejects. He is left alone in the courtyard when a mysterious creature, Ondine, appears from a waterfall in the garden.

From a hiding place Palemon watches Ondine dance in the moonlight, frolicking with her shadow.

Attracted to her, he shows her the amulet which she takes from him. Suddenly she feels his heart beating and she flees into the forest with Palemon rushing after her.

Berta’s friends witness this and organize a hunt to pursue Palemon and Ondine.

Tirrenio who is the Lord of the Mediterranean, and his water sprites lie in wait for the lovers. Tirrenio tries to separate them but when he fails, he warns Palemon that if he should be unfaithful to Ondine, he will die.

Ondine defies Tirrenio, and together with Palemon finds a hermit who marries them.

As they leave, Berta and the hunt enter only to be driven in terror from the forest by Tirrenio and his creatures.

Act II: On Board A Ship Palemon and Ondine decide to take passage in a ship.

Berta has followed them but does not know of Palemon’s marriage also comes on board unobserved.

When they have set sail, she is made jealous by seeing Palemon offer the amulet again to Ondine, who accepts it. Berta now accuses Palemon of faithlessness. Ondine promptly gives her the jewel, but Tirrenio, rising from the sea, snatches it from Berta.

Ondine seeks to compensate Berta for this loss by pulling a magical necklace from the sea, but Berta rejects this as witchcraft and tosses it back at her.

The sailors are by now thoroughly alarmed at the presence of Ondine on board and threaten her.

Tirrenio arises in fury from the sea again, creates a great storm in which the ship is endangered and he carries Ondine away to the bottom of the sea.

Palemon and Berta escape the shipwreck by climbing onto a rock.

Palemon and Berta, saved from the storm, have just been married, and Berta shows Palemon her wedding gift to him, a portrait of herself. She leaves him alone while she goes to welcome their guests, and Palemon has a vision of Ondine mourning him below the waves.

His reverie is interrupted by the arrival of the guests who join in a series of brilliant dances. Suddenly they are disturbed by the appearance of Tirrenio with a host of sea-sprites. They drive the guests away, Berta is led out, and though Ondine tells him that if he kisses her it will mean his death he cannot resist her beauty and his love for her. They kiss, and he falls dead in her arms.

A final scene shows Ondine back at the sea-bed, cradling her dead lover in her arms.

The History Of Ondine

Friederich de la Motte Fouque’s tale of Ondine appeared first in 1811, and was soon to prove a happy hunting ground for romantic choreographers.

Paul Taglioni and Jules Perrot were just two of them. In making his version, Ashton was influenced by this romantic tradition, even to the extent of providing a pas de I’ombre for his Ondine, too. The interest in this, his fourth full-length ballet, though, lies in the fact that Ashton was completely in control of all its elements and he devised his own libretto and worked for the first time with a commissioned score, rather than with one already written.

The result is a Ondine the ballet imbued with a splendid mystery. Throughout its length one is conscious of the sea and the mysterious forest, which is plainly near the sea. This ballet has a great central role, Ondine, which Ashton made as a superlative statement about Fonteyn’s gifts.

Like the water, this ballet flows along with none of the set pieces that one might expect. There is a return in Ondine to the older traditions of the romantic ballets of the past. The ballet is filled with superb movement, much of it given to Ondine, but there is also a magnificent, though over long divertisement in the last act, which was first intended to be given by Tirrenio’s creatures in disguise.

At its close they were to throw off their costumes and drive the guests into the sea, but this thrilling idea did not prove possible.

The most remarkable thing about this ballet is its atmospheric quality which evokes the mysterious quality of a doomed and impossible love set against the constant surge of the water.