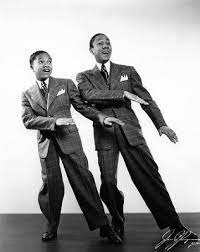 Their performance in the musical number “Jumpin’ Jive” (with Cab Calloway and his orchestra) featured in the 1943 movie Stormy Weather has been praised as one of the most virtuosic film dance routines of all time.

Harold (1921–2000) and Fayard (1914–2006) Nicholas were born in Philadelphia, U.S.A. They were the sons of college-educated musicians who played in their own bank. Their mother was a pianist and their father was a drummer.

Neither Fayard nor Harold had any formal dance training. Fayard taught himself how to dance, sing, and perform by watching and imitating the professional entertainers on stage. He then taught his younger siblings, first performing with his sister Dorothy as the Nicholas Kids, later joined by Harold.

Harold idolized his older brother and learned by copying his moves and distinct style. Dorothy later opted out of the act, and the Nicholas Kids became known as the Nicholas Brothers.

As they became better known around Philadelphia, they were first hired for a radio program, The Horn and Hardart Kiddie Hour, and then by other local theatres such as the Standard and the Pearl. When they were performing at the Pearl, the manager of The Lafayette, a New York vaudeville showcase, saw them and immediately wanted them to perform for his theater.

The brothers moved back to Philadelphia in 1926 and gave their first performance at the Standard a few years later.

In 1932 they became the featured act at Harlem’s Cotton Club. This was when Harold was 11 and Fayard was 18.

They astonished their mainly white audiences dancing to the jazz tempos of “Bugle Call Rag” and they were the only entertainers in the African American cast allowed to mingle with white patrons.

They performed at the Cotton Club for two years, working with the orchestras of Lucky Millinder, Cab Calloway, Duke Ellington, and Jimmy Lunceford. During this time, they filmed their first movie short, Pie Pie Blackbird, in 1932, with Eubie Blake and his orchestra.

In their hybrid mix of ballet, tap, and acrobatics or flash dancing was the root of their success, as no other individual or group surpassed the effect that the Nicholas Brothers had on audiences and on other dancers. The brothers attributed their success to this unique style of dancing, which was greatly in demand during this time.

Their first movie part happened in 1934 with Kid Millions and in 1936 they made their Broadway debut in Ziegfield Follies.

They impressed their choreographer, George Balanchine, who invited them to appear in Babes in Arms. With Balanchine’s training, they learned many new stunts. Their talent led many to presume they were trained ballet dancers.

By 1940, they had moved to Hollywood and for several decades divided their time between movies, nightclubs, concerts, Broadway, television, and extensive tours of Latin America, Africa, and Europe.

The Nicholas Brothers belonged to three different classes of acts happening from the 1930s to the 1960s. Tap Act, Class Act, and Flash Act. This was part of the mainly black American entertainment culture. In those days it was important that you were classed in one of the following acts, as it was your statement and your way of making a living.

The Nicholas Brothers belonged to all three of these acts and their tap speaks for itself.

The flash included the other two plus emphasis on speed, agility, and control of props such as hats and canes.

The tap act of course speaks for itself.

The Flash boys invented the splits and the jump down into (and pulling up out of, without using hands) the splits at every crazy opportunity. They were a wonder to watch.

Begining as very young brothers, they were in professional films by the age of 10 and 13. They were an act of the highest skill, super-fast, clean, clever, sharp, and extremely talented.

They were soon in Hollywood working alongside Fred Astaire and Gene Kelly, as well as starring in their own films such as ‘Down Argentine Way.”

If you have never seen the Nicholas Brothers not only jumping down into splits continually but downstairs, one over the other, as the finish to an already exhausting routine, then you must see the video below.

They complimented each other so beautifully. Standing forward somersaults, sliding in splits through the legs of his brother, jumping down from the top of the podium where the band was playing into splits, walking forward on the inside of the ankle whilst in box spits. Wow, the Nicholas brothers could do it all.

It is their flash skills that everyone remembers, but their Tap skills were also legendary. More than that, there were exquisite performers who looked good and gave everything. They further broke down the barrier between white and black in show business and were a spectacular and incredible success for so many years.

Now they are considered among the all-time great names and have proved that dancing and of course tap especially is the best way of staying fit and living a long life, as they both did.

If you want to read more about the lives of the Nicholas Brothers, click here.

Le Carnaval - What Happened To This Ballet?
Improve Ballet Turnout Without Injury
An Old Ballet For You...About A Horse
Basic Background of Ballet