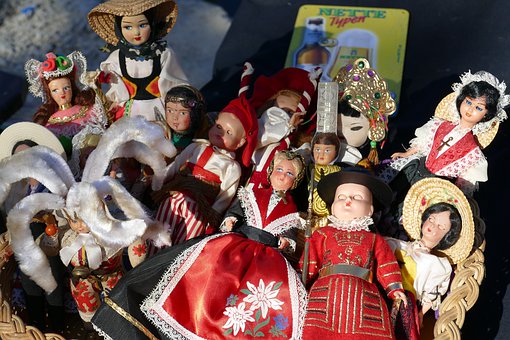 La Boutique Fantasque Ballet is a one-act ballet that was first performed by Ballets Russes in Alhambra Theatre, London on the 5th of May 1919. This ballet is also known as The Magic Toyshop or The Fantastic Toyshop.

The choreography was done by Leonide Massine and the music by Rossini. Massine and Lopolova were the cancan dancers. Enrico Cecchetti was the shopkeeper.

The story of La Boutique Fantqasque Ballet has similarities to Die Puppenfee (“The Fairy Doll”) which was an old German ballet by Josef Bayer that had been performed by Jose Mendez in Moscow in 1897 and by Serge and Nicholas Legat in St Petersburg in 1903. Others note the similarities to The Steadfast Tin Soldier by Hans Christian Andersen.

The ballet is set in France in 1860. When the curtain rises, a pretty toy shop is revealed through whose windows we can glimpse a Mediterranean harbor.

The shopkeeper and his assistant enter. A street urchin dashes in and tries to steal something but is speedily ejected.

The customers start to arrive.

First are two English old maids, then an American husband and wife with their son and daughter.

Next a Russian family arrive wilting in the heat, with father carrying one daughter, three more girls in tow, plus mother and son.

All these visitors are delighted with the variety of toys that are displayed.

There are two dolls on a stand, a pair of Tarantella dancers, a quartet of court cards, a snob, a melon seller, a Cossack chief, his five soldiers and a Cossack girl, two dancing poodles and a pair of cancan dancers. It is the cancan dancers that win everyone’s heart, and the Russian father is pestered to buy the girl. The American father must then buy the boy for his children.

The two dolls are packed up, the customers pay and leave, with a promise that the dolls shall be delivered in the morning.

The shop is closed for the night, as in every well-regulated fantastic toy shop the dolls promptly come to life.

They are filled with sadness that the two cancan dancers are to be separated. The two cancan lovers decide to flee and take a fond farewell of their companions who aid their flight.

In the morning the shopkeeper and his assistant open the shop and soon his customers of the previous day arrive demanding to know why the two dolls have not been delivered as promised.

The shopkeeper reassures them and shows them the two parcels ready, but on examining them, the dolls are found to have flown.

More About The History

The ever-popular idea of dolls coming to life (source of a number of ballets from Coppelia onwards) is given an irresistible charm in Boutique, not least because of the skill with which Ottorino Respighi orchestrated a series of unpublished piano works by Rossini with merry titles, like Four Hors d’Oeuvere, Castor Oil, Asthmatic Study, Ugh! Peas, and Abortive Polka. The music contributed highly to the success of the ballet.

Equally attractive are the designs by Andre Derain, still appealing even after many years, but then so is the ballet.

Unlike many works of this period, La Boutique Fantasque Ballet can still (with loving, careful performance) retain something of that first rapture it must once have had so abundantly. The choreography is witty, strongly made, even more strongly characterized (with what economy Massine captures the Snob) and the action combines drama with divertissement in marvelous balance. And, of course, the roles were excellently created.

Massine and Lopokova were the original cancan dancers. When in 1947 Massine came as a guest artist to the Royal Ballet at Convent Garden and mounted La Boutique for them, he danced the male cancan dancer again. In the following year Alexandra Danilova also came to Convent Garden as a guest and patrons had the joy of seeing her performance as the cancan girl in partnership with Massine.

Danilova’s beautiful legs, her with, the sheer bubbling champagne of her presence on stage set a standard that no later Royal Ballet performer has yet approached.

Here is a more recent version of La Boutiqu3e Fantisque Ballet for you to see, and this clip includes a lot of the highlights of the ballet.