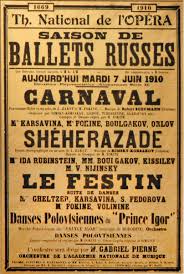 Le Carnaval was a pantomime ballet which was one act long written and danced in the early 1900’s.

Lebretto and choreography was by Fokine

Music was written by Schumann and orchestration was done by Rimsky-Korsakov.

Scenery and Costumes were done by Leon Bakst.

Le Carnaval ballet was first performed after three spontaneous rehearsals as a charity performance in the Pavlov Hall in St Petersburg on the 20th of February 1910 by the Ballets Russes, then again in Western Europe at the Theater des Westens in Berlin on the 20th of May 1910. 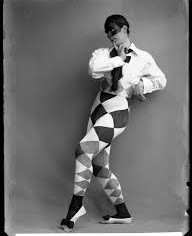 On 14 September 1933, the ballet was revived again in London by the Ballet Russe de Monte-Carlo (staged by Woizikovsky) for Alexandra Danilova (appearing as Columbine).

In 1937, it was staged by the Vic-Wells Ballet with Margot Fonteyn dancing the role of “Columbine

This ballet has no real plot or storyline, it is merely a series of light, humorous, and joyous incidents combined with some moments of poignancy and an undercurrent of satire. 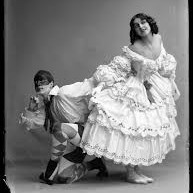 The scene takes place in the ant-chamber of a ballroom and its only furniture is two small striped settees.

Columbine, Harlquin, Pantalon, the wistful Peirrot, and other characters from Commedia Dell’arte, intrigue, frolic and suffer with the characters of Schumann’s youthful imagination in a succession of dances and situations linked by the antics of Harlequin.

Le Carnaval had no great success with the Parisian public who saw it a month after Berlin in 1910.

Le Carnaval became beloved elsewhere and is recognized as one of Fokine’s more important works.

It is another exercise in his romantic revival, another restoration of the male dancer through the roles of Harlequin, Pierrot and Pantalon, first danced respectively by Nijinsky, Bolm and Cecchetti (with Karsavina as Columbine). Le Carnaval is  another ballet of contrasting moods evoked through dances which extend the range and forms of the pas de deux, pas de trois and pas seul which it uses.

The elusive combination of gaiety, sadness and precise timing required for the total effect is extremely difficult to achieve and the main reason why satisfactory performances of this ballet have very rarely been seen since the end of the Diaghilev Ballet.

Why Don’t We See This Ballet Much Anymore?

Le Carnaval seems to have been the most delicate, most exquisite ballet Michel Fokine ever created, as well as the most difficult to pinpoint.

As was the case with many of his works, the roles depended to a large degree upon the talents of the original performers, and if one looks at just the steps (except for the one Harlequin solo) they are almost simplistic. It was the infusion of lightness, gaiety, coyness, and self-absorption, combined with an underlying sadness, all of which must be contributed by the dancers themselves. That resulted in what most critics of the time regarded as a most effective adaptation of Schumann’s music and characters.

Recent attempts to reconstruct the work in England, Sweden, and the United States have had varying degrees of success. This is because the roles must be created from within each individual performer, not from externally imposed steps or gestures. They require someone like Fokine himself to elicit this from the dancers, which is unfortunately an almost impossible task for our more modern choreographers.