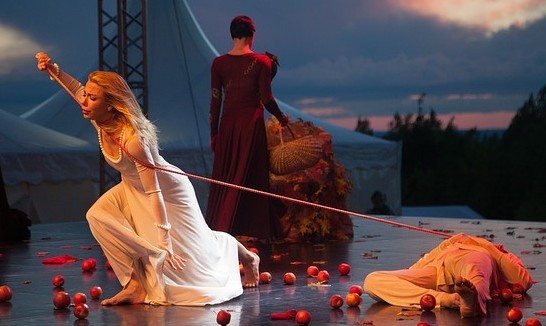 Let’s look at one of the most famous tragic stories of all time – The Romeo and Juliet Ballet Story. Here is a history lesson for you, as well as the synopsis of this famous ballet.

When Diaghilev died in 1929, the many talented people that he had gathered around him spread out around the world to find themselves work. Very few of them returned to their native Russia, but composer Prokofiev was one of them who did.

Inside of Russia, classical ballet did not develop as it was too restricted during the Tsar’s regime. However, the strong teaching tradition remained and strong dancers like Ulanova were produced during this time. When Prokofiev finally managed to get his idea for a ballet based on Shakespeare’s Romeo and Juliet accepted, it was Ulanova who danced the first Juliet in Russia. She also danced the role when the Bolshoi Ballet visited London over fifteen years later in 1956.

In most of the balletic versions of Romeo and Juliet, many of the details of Shakespeare’s tragedy have been omitted, and the central touching drama is more concentrated on.

The Montagu and Capulet families have been enemies for a long time. Romeo is the son of the Montagu’s. Mercutio and Benvolio his friends have an argument with Tybalt, who is Juliet’s brother, which leads to a serious fight. Both Lords of the two families then join in with their retainers, until the Prince of Verona commands that they stop and heal the rift between them.

The Capulet’s hold a very grand ball and allow their young daughter Juliet to attend. Her parents have promised her to Paris for an arranged marriage. Romeo and his friends sneak into the house in masks to avoid recognition. Romeo sees Juliet and it is love at first sight. She feels the same. Tybalt recognizes Romeo and asks him to leave, but Lord Capulet remembers the prince’s order and lets him stay.

Later that night Juliet is unable to sleep and wonders out onto her balcony thinking of Romeo. He appears in the garden below and they express their love for one another. Romeo is determined that he will marry Juliet and a letter from her delivered by her nurse tells hem that she will become his wife.

They secretly meet at the Chapel and Frair Lawrence marries them, hoping that this bond will unite their families. When Romeo returns to the town he finds his friends fighting with Tybalt again and tries to stop them. Tybalt mistakes this for cowardice and carries on fighting only to kill Mercutio. In anger, Romeo retaliates and kills Tybalt. He is banished by the Prince, so he spends one last night with Juliet and leaves Verona at dawn.

Juliet refuses Paris’s hand in marriage, in spite of the terrible threats by her father. Desolate she asks Frair Lawrence for his help and he gives her a potion which will make her fall into a death-like sleep. Once she is in the family vault, Frair Lawrence says he will arrange for Romeo to take her away.

To avoid her family getting suspicious, she agrees to marry Paris and then takes the potion. The family finds her apparently dead with the poison near her hand.

She lies unconscious in the vault waiting for Romeo, but the message never reaches him, and he believes that she is really dead. He comes to the vault and poisons himself at her side. When Juliet regains consciousness and finds Romeo dead she kills herself.

And that my dancing friends is the full Romeo and Juliet ballet story in a nutshell. It is a real tragedy.

Here is the full-length ballet of Romeo and Juliet for you to watch.

Who Was Bronislava Nijinska?
Les Sylphides Chopin - The Ballet And It's History
Dame Margot Fonteyn De Arias - Who Was She?
Ballet Costumes History Snippets