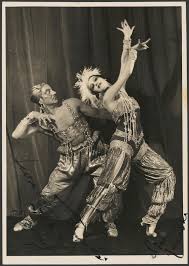 The Scheherazade Ballet is another one of those old Russian Ballets that has stood the test of time. In this article, I will be looking at both the Scheherazade ballet story and history, as I love to see how these old ballets originated and were put together.

A Bit Of Ballet History

Nijinsky who danced the golden slave was painted gold and eroticism was highly present in the orgiastic scenes played out in the background.

Controversially, Scheherazade was one of the first stage and ballet instances of people simulating sexual activity. Nijinsky was short and androgynous but his dancing was powerful and theatrical. Scheherazade flipped the conventions of classical ballet through the redirection of audiences’ focus from the grace and beauty of female bodies to male prowess and sensuality.

Fokine’s choreography was based on the study of Persian miniatures and he managed to realize the feeling and thought of each of the characters expertly.

This ballet needs artists of the quality of its original performers to interpret the subtleties of Fokine’s style and achieve a proper suspension of disbelief. For this reason, it is a work by which to remember the Russian Ballet rather than to revive today.

No revival has managed to achieve more than a bogus Orientalism, which seems crude and feeble and very far from the power of the original.

In the video above you can see the entire Scheherazade ballet done by the Russians.

This ballet is based on the first tale in the book of The Thousand And One Nights. Although creating a tremendous impression through the performance of its principal artists with Ida Rubinstein as the first Zobeida, Cecchetti as the first Chief Eunuch and Nijinsky as the first golden slave, the honors go chiefly to the decor that was done by Bakst.

His skillful mix of violent glowing color with the cunning use of perspective created exactly the atmosphere of sensuality and passion with the theme required. Bakst’s designs were so successful that they influenced Parisian fashions at once and continued to influence interior decoration for many years thereafter.

The Scheherazade storyline runs as follows:

Shahryar who is the king of India and China is seated in his harem with his favorite wife Zobeida on his left-hand side and his brother Shah Zeman on his right. 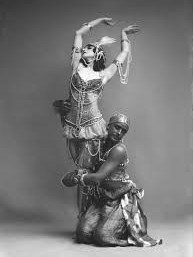 Shahryar is angry because his brother has hinted that is wives are unfaithful. To test the harem, Shahryar departs on a hunting expedition.

As soon as he is gone the wives adorn themselves with jewels and bribe the Chief Eunuch to open two of three blue doors at the back of the room where the male slaves live.

The Chief Eunuch is about to depart when Zobeida demands that the third door too shall be opened. Deaf to his warning and entreaties she insists and bribes him.

There is a flash of gold and a Negro leaps from the open door to Zobeida’s side. Together they fall upon the devan.

They dance lead by the Golden Slave, joined by Zobeida.

In the midst of this party, Shahryar returns. The slaves and women seek blindly to escape only to be cut down by the Shahryar’s soldiers.

The Chief Eunuch is strangled and Shahryar himself destroys the gold-clad Negro.

Our Scheherazade ballet story ends with Zobeida. Proudly, she confronts the Shah, then preferring death to public dishonor, she snatches a dagger and takes her own life.