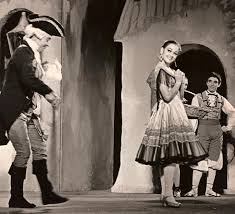 Le Tricorne Ballet or in English, The Three-Cornered Hat is unique because of the mastery with which Massine, the choreographer, adapted the techniques of Spanish dancing to the theatre. The steps are all authentic, but their organization and arrangements are the fruit of classical choreography.

Picasso did the decor, and Le Tricorne Ballet was first performed by Ballets Russes at the Alhambra Theatre in London on the 22nd of July 1919.

Massine himself danced the Miller and Karsavina his wife.

The ballet was a triumph from the very first display and it remains a unique work because, despite countless attempts to make other ‘Spanish’ ballets to reuse the music and even to cast Spanish dancers into it, Massine’s version of Le Tricorne has never been rivaled or even approached in its genre.

This post may contain affiliate links, which means if you purchase anything on this page, I will get a small commission at no extra cost to you.

The story tells of a miller and his beautiful wife, who is the recipient of lots of attention.

After a short, prelude the curtain rises revealing a mill in Andalusia. The miller is trying to teach a pet blackbird to tell the time. He tells the bird to chirp twice, but instead, it chirps three times.

A dandy crosses a bridge with his kite and blows her a kiss.

He is followed by the provincial governor (corregidor), who is the wearer of the tricorne, who passes by with his wife and a retinue and takes a fancy to the Miller’s wife.

The procession leaves, but soon the governor returns, and as the Miller is away, he indulges in a flirtation with the Miller’s wife.

As they dance he falls exhausted to the ground, and the Miller returning joins his wife in mocking the old man.

He exits and the Miller, his wife, and their neighbors perform a general dance, which features a dazzling farucca from the miller.

Suddenly the governers guards (Alguazils) return bearing a warrant for the Miller’s arrest, and desolated, the wife watches them lead her husband away.

With the Miller out of the way, the Corregidor returns yet again to complete his supposed conquest of the Miller’s lovely wife, but as he dodders after her onto the bridge, dropping his cloak, she pushes him into the river.

As he struggles out, the Miller’s wife threatens him with a musket and then leaves, while the Corregidor, old, cold, and suffering, wraps himself into the Millers huge hooded coat and takes refuge in the Miller’s bed to try and warm himself.

The Miller enters, as he has escaped from the Alguazils, and he discovers the Corregidor. He mocks him by rudely caricaturing him on the wall of the house.

The alguazils now enter in search of the Miller, but they find instead the dripping figure of the Corregidor in the Miller’s coat. They do not recognize him at first, and after maltreating him, drag him away. the villagers celebrate the departure of this petty tyrant with a final jota in which they toss him in effigy in a blanket.

The performance uses not only Massine’s original choreography but actual reproductions of Picasso’s sets and costumes.

Here is the only version I could find in the film version online. It is more focused on the lively music with some lovely Spanish dancers featured from Antonio Marquez’s company, from Spain. It is in no way a replica of the original Le Tricorne Ballet, but I am sure you will enjoy this version as much as I did.

A Cinderella Theme Class To Teach
Ondine The Ballet
Scenes De Ballet - Another Ashton Masterpiece
Les Noces Ballet - Have You Heard Of It?