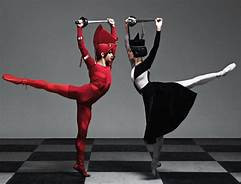 Not many have heard of Checkmate the ballet, but teachers don’t you think that the game of chess is an excellent idea for a mini ballet or concert theme?

This is a ballet in one scene with a prologue. The music and libretto was done by Arthur Bliss and the ballet was choreographed by Ninette de Valois. The scenery and costumes were done by E McKnight Kauffer.

The Checkmate ballet was first performed at Sadler’s Wells Theatre in London on the 5th of October 1937. It was then revived and redesigned by McKnight Kauffer for the Royal Opera House, Covent Garden on the 18th of November 1947, ten years later.

This video has photo’s of the ballet with the music from Checkmate the ballet playing.

There is a brief prologue before the curtain rises to show Love and Death at a chesboard.

Love backs the Red Knight to win, but Death backs the Black Queen.

The stage has a chessboard setting with an angry-coloured backcloth on which the red pieces are assembling.

First come the Pawns, then the light-hearted pages, then the two Red Knights, who are fierce and powerful fighters.

Two enemy Black Knights enter on a reconnoitring visit of chivlary. They are followed with the entrance of the Blak Queen, who is the most powerful piece on the board.

Before her departure, she wins the love of the Red Knight, who dances a joyous mazurka. The two Red Bishops enter, their dignified ceremony interrupted by the two Red Castles who are inhuman and menacing.

Finally the Red King and Queen approach. The king is old and weak and is the weakest piece on the board. The parade of the red pieces is complete.

As the game begins, the enemy black pieces attack and ‘check’ the undefended Red King. His bishops and his Queen try to defend him, but are defeated. the Red Knight jumps into the arena as campion to fight the Black Queen.

He is torn between love and loyalty, hesitates to kill her, then is tricked and killed by her.

The Black Queen is now in possession of the board. The black pieces force the Red King back to his throne until the point of death. He faces his assailants.

The Black Queen stabs him and he falls lifeless. So this is indeed checkmate.

The figures play out their game as a strong human drama rather than an authentic game of chess, so that the ballet is very much in the dramatic genre of Job and The Rake’s Progress, and thus worthy to rank beside them.

Bliss’s music lacks the tightness of their scenarios, and although his music is vigorous and exciting in itself, it tends to extend crucial scenes beyond the limits of the dancer’s physical endurance, thus weakening the dramatic effects.

Even so the ballet makes a powerful piece of theatre, very much reflecting the 1930s in the expressionist influences behind McKnight Kauffer’s designs and in the growing assurance of the dancing.

Heavy technical demands are made now upon the corps and a major role is created for a female dancer, unlike the situation in earlier de Valois ballets.

It shows the craft of the choreographer, with the dual basis of classical technique and national dance which de Valois is known for. The clean stabbing pointe movements of the red pawns in the opening sequence derive from classical technique, and the movements of the black pawns reflect national dance. The pas de basque is used again and again, there are traces of Morris and sword dances in the black pawns’ staves. De Valois herself said that some of these movements were inspired by a Japanese troupe that was appearing in London at the time.

Facade The Ballet We Forgot About!
Michel Fokine And How He Contributed To Dance
The Symphonic Variations Ballet By Ashton
Dance Revolution Or Dance Boom - You Decide