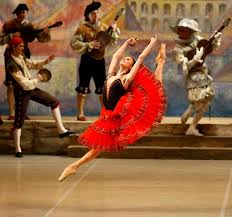 The Don Quixote Ballet is one of my favorite ballets of all time.  The energy and the music of this exciting ballet makes it a thrill to watch.

The History Of Don Quixote

Don Quixote ballet is quite long – 4 Acts and 8 scenes in some cases. based on episodes taken from the famous novel Don Quixote de la Mancha by Miguel de Cervantes. It was originally choreographed by Marius Petipa to the music of Ludwig Minkus and was first performed by Moscow’s Bolshoi Ballet at the Imperial Bolshoi Theatre in Moscow on the 14th of December 1869.

Petipa and Minkus then revised the ballet into a more elaborate and expansive version in five acts and eleven scenes for the Mariinsky Ballet, first presented on the 9th of November 1871 at the Imperial Bolshoi Kamenny Theatre of St. Petersburg.

All modern productions of the Don Quixote ballet are derived from the version staged by Alexander Gorsky for the Bolshoi Theatre of Moscow in 1900, a production the ballet master staged for the Imperial Ballet of St. Petersburg in 1902.

Don Quixote was brought from Russia to other countries first by Anna Pavlova’s company in 1924 in an abridged version of Gorsky’s 1902 production, though the full-length work was not staged abroad for many years.

The famous Grand Pas de Deux from the ballet’s final scene was staged in the West as early as the 1940s, given first by the Ballet Russe de Monte-Carlo.

The first full-length production mounted outside of Russia was a completely new staging, produced and choreographed by Ninette de Valois for The Royal Ballet in 1950. 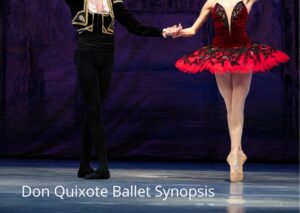 Don Quixote, a valiant and eccentric old gentleman, lies ill at his castle in Barcelona, surrounded by dust-covered books, which he has been reading tales of the gallant knight-errant.  He dreams of the Lady Dulcinea, heroine of one of the stories, and in his delirium, vows to save her from her persecutors.

His neighbor, Sancho Panza, pursued by two market women who have been sent to fetch him home, interrupts the Don’s delusions. Don Quixote enlists him as his squire and together they set out on their chivalrous adventures.

At the Port of Barcelona, the lovely Kitri seeks out her sweetheart, the gallant young barber, Basilio.  Their happy meeting in the square is interrupted by her father, the innkeeper Lorenzo, who tries to force her into accepting the hand of Gamache, a rich nobelman.  She refuses and with Basilio takes part in the festivities of the townsfolk.  The joy of dancing is broken up by the arrival of the Don and Sancho Panza, who becomes the target of some horseplay by the villagers, until his master rescues him.

As Kitri dances with Basilio, Don Quixote imagines her to be Dulcinea and invites her to be his partner. Gamache is furious but reluctantly joins with the crowd in supporting the Don’s hallucination. In the confusion that follows, Kitri and Basilio run off to get married with Lorenzo and Gamache in hot pursuit. Don Quixote and Sancho Panza set out after them to right all the wrongs. 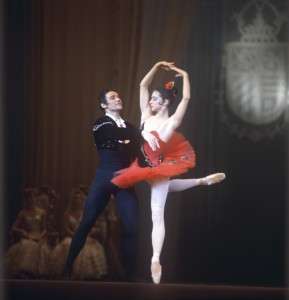 The lovers, seeking shelter in a windmill on the plain of Monteil are captured by a troupe of gypsies, who then discover they have nothing worth stealing. Instead, they seize and rob Lorenzo and Gamache, but, with the sudden appearance of the Knight and his squire, they co-operate with Kitri and Basilio in a plot to set the Don against their pursuers.

Their plans are foiled when Don Quixote is distracted by the windmills which he takes for monsters and which he attacks with great courage, but with unfortunate results.

As the gypsies laugh at his defeat, the lovers run off with Lorenzo and Gamache hot at their heels.

Lying unconscious from his wounds, Don Quixote dreams he is in a magic garden where the Queen of the Dryads brings a grateful Dulcinea to him. He declares his love for her. The dream fades, and rousing himself, he sets off once more to find his lady, with the help of Sancho Panza.

Kitri, Basilio, and their friends are celebrating their escape in a tavern when Lorenzo and Gamache, with Don Quixote and Sancho Panza not far behind, arrive.  Lorenzo is determined to marry his daughter to Gamache.

In desperation Kitri and Basilio decide to try playing a last trick on Don Quixote.  Basilio pretends to stab himself in jealous despair, while Kitri implores the Don for help. In his pursuit to right a wrong, the Don forces Lorenzo to bless the young lovers before they are parted forever. Indignant, Gamache challenges the Don to a duel and is defeated.

The lovers are united.  As Don Quixote gives his blessing to the young pair, he sees a vision of Dulcinea still leading him on his quest. Valiantly he sets out with Sancho Panza by his side to once more perform deeds of chivalry in Dulcinea’s service.

Here is a short extract of Kitri and Basilio dancing together.  You can see from this just what a vibrant ballet Don Quixote is.

So next time Don Quixote is showing in your area, make a plan and go and see it. You will love it!