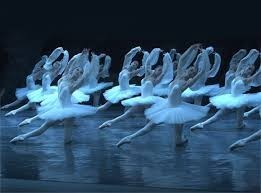 La Bayadere Ballet is a huge spectacle of a production in four acts and seven scenes.

The choreography was done by Marius Petipa and the music by Ludwig Minkus.

The La Bayadere Ballet (meaning The Temple Dancer or The Temple Maiden) was first performed at the Bolshoy Theater, St Petersburg on the 4th of February 1877.

Here is the full-length ballet for you to watch if interested, complete with explanations of what is happening in the complicated storyline.

The Story In A Nutshell

This Indian extravaganze is in the Romantic Style and tells the story of Solor, a warrior, who falls in love with a temple dancer (a Bayadere), Nikiya. They have sworn eternal fidelity to one another.

A Brahmin priest loves her too but she rejects his attention. He, in turn, learns of her relationship with Solor.

Moreover, the Rajah Dugmanta of Golconda has selected Solor to wed his daughter Gamzatti (or Hamsatti, as she is known in the original production).  Solor is offered the hand of Gamsatti, daughter of a Rajah, and he is unable to refuse.

Nikiya, unaware of this arrangement, agrees to dance at the couple’s betrothal celebrations.

In his effort to have Solor killed and have Nikiya for himself, the jealous High Brahmin informs the Rajah that the warrior has already vowed eternal love to Nikiya over a sacred fire.

But the High Brahmin’s plan backfires when, rather than becoming angry with Solor, the Rajah decides that it is Nikiya who must die.

Gamzatti, who has eavesdropped on this exchange, summons Nikiya to the palace in an attempt to bribe the bayadère into giving up her beloved. As their rivalry intensifies, Nikiya picks up a dagger in a fit of rage and attempts to kill Gamzatti, only to be stopped in the nick of time by Gamzatti’s aya.

Nikiya flees in horror at what she has almost done. As did her father, Gamzatti vows that the bayadère must die.

At the betrothal celebrations, Nikiya performs a somber dance while playing her veena.

She is then given a basket of flowers which she believes are from Solor, and begins a frenzied and joyous dance. Little does she know that the basket is from Gamzatti, who has concealed beneath the flowers a venomous snake. Nikiya then holds the basket too close and the serpent bites her on the neck. The High Brahmin offers Nikiya an antidote to the poison, but she chooses death rather than have a life without her beloved Solor.

In the next scene, Solor is feeling depressed and smokes opium.

He then has a vision of Nikiya’s Spirit in a nirvana among the star-lit mountain peaks of the Himalayas. This is called the Kindom of Shades.

Here the lovers reconcile among the spirits of the other bayaderes.

When Solor awakens, preparations are underway for his marriage to Gamzatti.

In the temple where the wedding is to take place the spirit of Nikiya haunts Solor as he dances with Gamzatti.

When the High Brahmin joins the couple’s hands in marriage, the gods take revenge for Nikiya’s murder by destroying the temple and all of its occupants. The temple is struck by lightning and it crashes to the ground killing everyone beneath its ruins.

The spirits of Nikiya and Solor are reunited in death and eternal love. 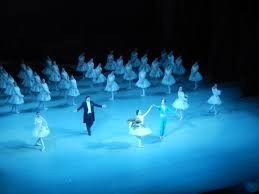 When the Kirov Ballet made their first London appearance in July 1961, they brought the beautiful and exciting Kingdom of Shades scene from the La Bayadere Ballet.

As the first of the thirty-two spirit Bayaderes appeared on the stage and began that slow unfolding of arabesque penche after arabesque penche, the audience became aware of something both novel and beautiful.

To realize that this choreography was about a hundred years old was to be reminded once again of what a genius Petipa’s was.

The Kindom of Shades is a masterpiece of choreography and it relies entirely upon its dancing as the drama is only minimally present. One Soviet critic called it ‘symphonic’ in structure and this is certainly true in the way the corps de ballet echoes or enhances the work of the principals.

Although there is a reminder of the second act of Gizelle, the choreography is far superior in the La Bayadere Ballet.

The most extraordinary thing about the ballet is that it looks quite modern and far less dated and old-fashioned than many other ballets half its age.

The entire ballet has been restaged and revised by Natalya Makarova for the American Ballet Theatre.

Below you can see a stunning preview of the highlights of the La Bayadere Ballet done by the Royal Ballet in Markarova’s style.

Anna Pavlova Biography (1881-1931)
Hope in a Ballet Shoe Book Review
Royal Academy Dance - A Brief History For You
What Is Locking In Hip Hop Dancing?