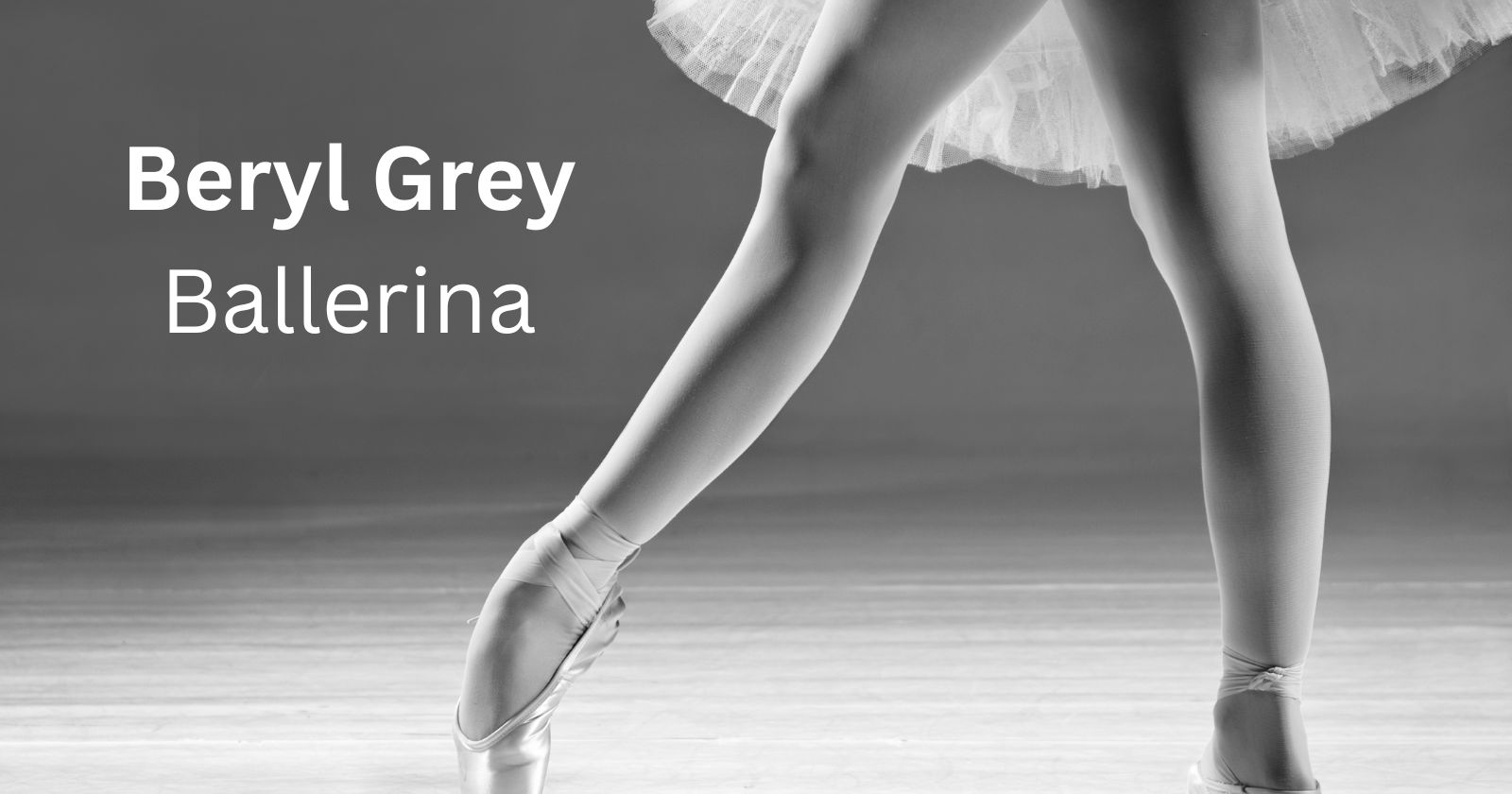 There was absolutely nothing grey about Beryl Grey Ballerina of yesteryear as she has made such an impact on British Ballet over the years.

She was born in 1927 and apparently still had her ebony hair well into her old age. She was elegant and had the most beautiful lines when she danced. She died on the 10th of December 2022 at the age of 95, and I can’t believe that I haven’t done an article about this remarkable dancer and teacher yet. 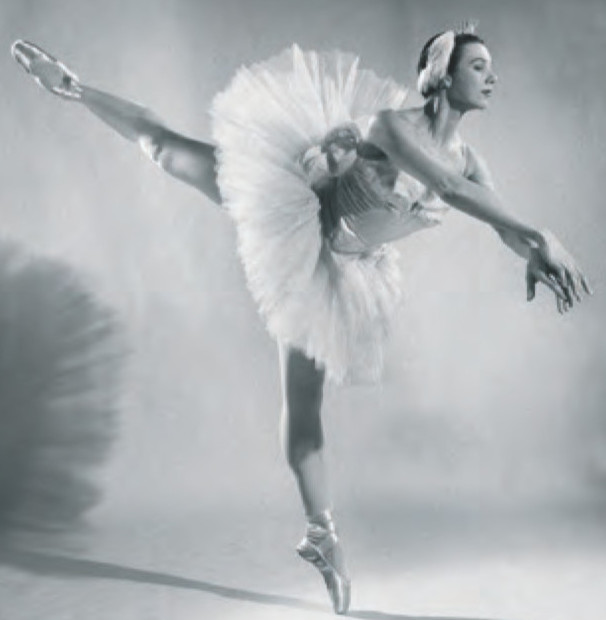 Dame Beryl Grey Ballerina – Her Life in a Nutshell

Her first teacher was Madeleine Sharp, who was a pupil of Phyllis Bedells. She started at the tender age of three and did all her RAD ballet exams except for the Advanced Grade as she was too young at the time.

Sharp decided to enter her for a RAD scholarship, to give her access to the teaching she needed. But on the day she had mumps. She was very upset and not even her favorite treat of a cream meringue, brought by her father on his return from work, could cheer her up.

However, she auditioned for a Sadler’s Wells Ballet School scholarship, since her parents could not afford the required dancewear extras. To her surprise, Ninette de Valois just made her bend and point her feet and then asked if she had a little solo. She did ‘The Birdcage’ with Sharp providing her straw hat in lieu of a cage and humming the music. Despite the unpromising circumstances, the result was a unique contract, signed by de Valois and Lilian Baylis, for a child aged not quite ten: four years in the school with free training, then four in the company, starting at 10 shillings a week.

This opportunity fast-tracked her into a stage career. At 14, when the law considered her old enough to stop school, she joined the company and went touring all over the country. She remembers fondly that she was one of the flowers in The Nutcracker’s last-act waltz and how, as they stood decoratively on stage during the divertissements, rain would drip down on them through leaking roofs. So as you can see, life on the stage is not always glamorous.

It was in a Cambridge Nutcracker that she danced one of her first solos – at a few seconds’ notice – when a principal, Moyra Fraser, twisted her ankle. She could do it because she ‘watched everything and learned everything.’ She had been just nine months in the company, when, one morning, de Valois asked her to stand in that same night for an unwell Margot Fonteyn in Les Sylphides.

She had never even done the pas de deux before (partner work) but she remembered that Bobby Helpmann, her partner, was wonderful.

The next day, as Fonteyn was still indisposed, de Valois summoned her again and said she would be doing the first lakeside scene of Swan Lake. She thought it was one of the big swans at firsst, but it was the lead. She must have made a good impression since de Valois decided to coach her for the full-length ballet and she made her debut, on her 15th birthday, at the New Theatre in St Martin’s Lane, partnered by Helpmann. The youngest Odette-Odile later became the youngest Giselle, aged not quite 17.

Audiences and critics loved her and the warmth that came across when she danced. De Valois said “She was lovely, absolutely enchanting… very assured, very confident, with a beautiful clean line and a fluent style.’

Later, she would achieve success in tall-girl roles such as the Black Queen in de Valois’s Checkmate, Myrtha in Giselle, and the Lilac Fairy in Sleeping Beauty.

Frederick Ashton made perfectly- tailored roles for her, such as the Winter Fairy in Cinderella.

By 1957, though, shortly after Sadler’s Wells Ballet had become the Royal Ballet, she had become frustrated, so decided to go freelance as she wanted more opportunities.

She certainly got them as she became the first western ballerina invited to dance with the Bolshoi in Moscow, partnered by the legendary Vakhtang Chaboukiani (injured during rehearsals, then he was replaced by an excellent Yuri Kondratov).

On the trip, which also included Leningrad and Tbilisi, she found true friends. Galina Ulanova was a rock of support when she became ill with food poisoning. Maya Plisetskaya brought her fish-scaler to the theatre to roughen up the soles of her shoes. Marina Semyonova and Asaf Messerer were inspirational coaches.

Russia was followed by an invitation to China, to guest star in Beijing and Shanghai. She said it was the exact opposite of Russia, as in Russia she had so much to learn, and in China so much to teach, as they wanted to learn and were quick learners and worked hard.

She wrote two books about her trips called Red Curtain Up in 1958 and Through the Bamboo Curtain in 1965. She was actually a published writer before that as she did many articles for the Dancing Times when she was touring the US with Sadler’s Wells Ballet in 1949.

You can click on either of the books below to find out more about them.

She wanted to retire from dancing before the age of forty as she hated seeing dancers dancing for too long. She eased into retirement in 1966 by taking on the directorship of the Arts Educational Schools. and she stopped dancing altogether when she joined the London Festival Ballet in 1968 to tighten the lax rules they had. She made herself quite unpopular by firing some of the dancers. She held her first auditions and out of 200 people she only took one girl and one boy as she was shocked by the standard.

Her legacy for Festival Ballet included many impressive productions.
She brought in Mary Skeaping’s definitive production of Giselle. She invited Massine to stage Le Tricorne, Gaîté Parisienne, Le Beau Danube, and the Rarity Parade, with its Satie music and Picasso designs. And by signing up Nureyev to perform with the company, she also provided the showcase for his spectacular Sleeping Beauty and Romeo and Juliet.

She found the Festival ballet exciting, but not without its own drama. After 12 years, she left the company. It had taken her away from her son Ingvar during his teenage years and now her husband was getting older.

She was married to Swedish Osteopath Sven Svenson, who died aged 100 in 2008.

Although she was handicapped slightly in later life by macular degeneration, she was highly organized and disciplined, with a daily writing habit. She kept a diary of her life right from 1950.

Dame Beryl Grey Ballerina held numerous honorary doctorates and had been Vice President of the Royal Academy of Dancing since 1980, was President of the Imperial Society of Teachers of Dancing, and a Director of the Birmingham Royal Ballet. In September 1997 she was presented with the Queen Elizabeth II Coronation Award by Dame Antoinette Sibley.

The Award is given by the Royal Academy of Dancing to individuals in recognition of their great contributions to the world of ballet. She was appointed a Member of the Order of the Companions of Honour (CH) in the 2017 Birthday Honours for services to dance.

Dame Beryl Grey Ballerina will always be fondly remembered by the many people whose lives she touched in some way.

Sir Frederick Ashton
What Is Locking In Hip Hop Dancing?
Some Pointe Shoe History For You
Days Ulanova - Famous Ballerina Brought To Life