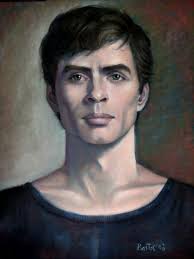 If you do ballet then you probably don’t need to ask ‘who was Rudolf Nureyev,’ as anyone who has been dancing for some time has heard of this famous male dancer.

So Who Was Rudolf Nureyev?

Rudolf Nureyev is regarded as one of the greatest male ballet dancers of the 20th century.

Rudolf Nureyev was born on the Trans-Siberian train near Pysinky, Irkutsk on the 17th of March 1938. His mother Farida was traveling to Vladivostok where his father Hamat who was a Red Army political commissar was stationed.

Rudolf was then raised as the only son in a Tatar family in a village near Ufa in the Soviet Republic of Bashkiria.

When his mother smuggled him and his sisters into a performance of the ballet Song of the Cranes, he fell in love with dance.

As a child he was encouraged to dance in Bashkir folk performances and his talents were soon noticed by teachers who encouraged him to train in Leningrad. 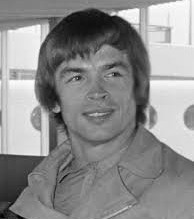 On a tour stop in Moscow with a local ballet company, Nureyev auditioned for the Bolshoi ballet company and was accepted. However, he felt that the Kirov Ballet School was the best, so he left the local touring company and bought a ticket to Leningrad.

Due to the disruption of the Soviet cultural life during World War II, Nureyev was unable to enroll in a major ballet school until 1955 when he was 17 years old. This is when he was accepted by the Leningrad Choreographic School which was the associate school of the Kirov Ballet.

Despite the fact that he had such a late start, he was soon recognized as an incredibly gifted dancer. He pushed himself hard rehearsing for hours in order to make up for the years of training that he missed.

Under the tutelage of a great teacher, Alexander Pushkin, he blossomed. Pushkin not only took an interest in him professionally, but also allowed the younger dancer to live with him and his wife.

Upon graduation, the Kirov and the Bolshoi both wanted to sign him, but he continued with the Kirov and went on to become a soloist, which is extremely unusual for someone of his age and experience.

In his three years with the Kirov, he danced fifteen roles mainly with partner Ninel Kurgapkira with whom he was very well pared, even though she was almost a decade older than he was.

Rudolf Nureyev became one of the Soviet Union’s best-known dancers, in a country which revered the ballet and made national heroes of its stars. Soon he was enjoying the rare privilege of travel outside of the Soviet Union, when he danced in Vienna at the international Youth Festival.

Not long after that for disciplinary reasons, he was told he would not be allowed to go abroad again. 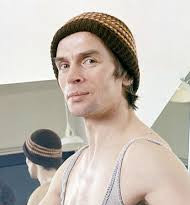 In 1961 the Kirov’s leading male dancer, Konstantin Sergeyev was injured and at the last minute Nureyev was chosen to replace him on the Kirov’s European tour.

In Paris his performances electrified audiences and critics, but he broke the rules about mingling with foreigners and allegedly frequented gay bars in Paris, which alarmed the Kirov’s management. The KGB wanted to send him back to the Soviet Union immediately.

He was then told that he would not travel with the company to London to continue the tour because he was needed to dance at a special performance in the Kremlin. Rudolf Nureyev believed that if he returned to the U.S.S.R., he would most likely be imprisoned due to the fact that KGB agents had been investigating him for being gay.

It has been the more popular and accepted belief that he ‘leaped to freedom’ in order to be a ‘free artist,’ though many of Nureyev’s private accounts, as well as the accounts of many of his close friends tell that he stayed in the west due to the dire consequences of being gay in the Soviet Union.

On June the 17th, 1961 at the Le Bourget Airport in Paris, Rudolf Nureyev defected.

Within a week he was signed up by the Grand Ballet Du Marquis de Cuevas and was performing the Sleeping Beauty with Nina Vyroubova.

His dramatic defection, outstanding technique, exotic looks and his astonishing charisma on stage made him an international star. His defection also gave him the personal freedom he had been denied in the Soviet Union.

On Tour in Denmark, he met Erik Bruhn, a dancer ten years older than him and they became lovers. Erik was also his closest friend and his protector for many years. Bruhn was also the director of the Royal Swedish Ballet from 1967 to 1972 and Ballet Director of the Paris Opera Ballet from 1983 to 1989.

Rudolf Nureyev petitioned the Soviet Government for many years to be allowed to visit his mother to whom he remained very close, but he was not allowed to do so until 1989 when his mother was dying. During this visit even with his diminished physical ability, he was invited to dance in Leningrad. This visit gave him the opportunity to see many of the teachers and colleagues he had not seen since his defection, including his first ballet teacher in Ufa. 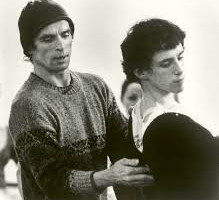 Nureyev’s first appearance in Britain was at a ballet matinee organized by the Royal Ballet’s Prima Ballerina Dame Margot Fonteyn. This event was held in aid of the Royal Academy of Dance, a classical ballet teaching organization of which she was the President.

He danced Poeme Tragique, which was a heavily symbolic solo choreographed by Frederick Ashton and he brought the house to its feet in the Black Swan pas de deux from Swan Lake.

Nureyev was so well-received by London audiences that Dame Ninette de Valois offered him a contract to join the Royal Ballet as Principal Dancer.

His first appearance with the company was partnering Margot Fonteyn in Giselle on the 21 of February 1962. Fonteyn and Nureyev went on to form what became known as the perfect partnership which became perhaps the most famous partnership in modern theater history, despite Nureyev being 19 years younger than Fonteyn.

They danced together for many years and their last performance together was in Baroque Pas de Trois on the 16th of September 1988, Fonteyn was 69 and Nureyev was 50.

Together they transformed such cornerstone ballets like Swan Lake and Gizelle. They also premiered in Sir Frederick Ashton’s ballet Marguerite and Armand, which was a ballet danced to Liszt’s B minor piano sonata, and this became their signature piece.

In 1982, Nureyev became a naturalized citizen of Austria and in 1983, he was appointed director of the Paris Opera Ballet, where, as well as directing, he continued to dance and to promote the younger dancers.

He remained there as a dancer and chief choreographer until 1989. Among the dancers he groomed were Sylvie Guillem, Isabelle Guérin, Manuel Legris, Elisabeth Maurin, Élisabeth Platel, Charles Jude, and Monique Loudières.

His artistic directorship of the Paris Opera Ballet was a great success as he lifted the ballet company out of a dark period. His version of The Sleeping Beauty remains in the Company’s repertoire and was revived and filmed later with his protégé Manuel Legris in the lead.

Despite his advancing illness towards the end of his tenure, he worked tirelessly, staging new versions of old standbys and commissioning some of the most ground-breaking choreographic works of his time. His own version of Romeo and Juliet was a huge success.

When he was sick towards the end of his life, he worked on a final production of La Bayadère which closely follows the Mariinsky Ballet version that he danced as a young man.

When AIDS appeared in France’s news around 1982, Nureyev took little notice. He tested positive for HIV in 1984, but for several years he simply denied that anything was wrong with his health. However, by the late 1980s his diminished capabilities disappointed his admirers who had fond memories of his outstanding prowess and skill.

Nureyev began a marked decline only in the summer of 1991 and entered the final phase of the disease in the spring of 1992.

Nureyev re-entered the hospital Notre Dame Du Perpétuel Secours in Levallois-Perret on 20 November 1992 and remained there until his death from AIDS complications at age 54 on 6 January 1993.

His funeral was held in the marble foyer of the Paris Garnier Opera House. Many paid tributes to his brilliance as a dancer. Oleg Vinogradov of the Mariinsky Ballet, stated “What Nureyev did in the West, he could never have done here.”

After so many years of having been denied a place in the Mariinsky Ballet’s history, Nureyev’s reputation was restored and his name was reentered in the history of the Mariinsky. Some of his personal effects were placed on display at the theater museum in what is now St. Pietersburg.

40 thoughts on “Who Was Rudolf Nureyev?”